Get ready for an exciting lineup of stars at the upcoming HISTORY CON, the country’s entertainment convention happening August 10-12 at the World Trade Center in Pasay City.

Get up close and personal with your favorite celebrities from HISTORY’s acclaimed TV programs, including Katheryn Winnick of HISTORY’s Emmy-winning series, Vikings. The actress has racked up several nominations, including one for Best Supporting Actress in a Drama Series from the Critics’ Choice Awards and another for Best Performance by an Actress in a Continuing Leading Dramatic Role from the Canadian Screen Awards. 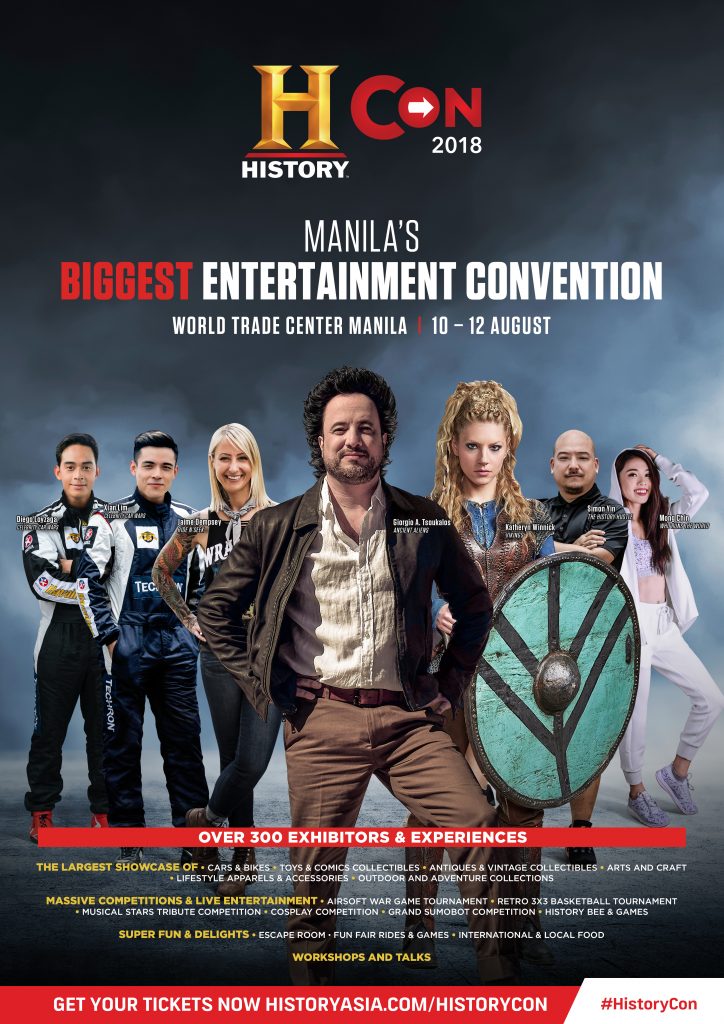 You can also catch international celebrities from your favorite shows like Giorgio A. Tsoukalos of Ancient Aliens, Jamie Dempsey of Ride N’Seek, Mongchin Yeoh of Who Runs the World, and Simon Yin of HISTORY Hustle and Hidden Cities Extreme. The stellar line-up will also include Xian Lim and Diego Loyzaga starring in HISTORY Asia’s award-winning original automotive reality series, Celebrity Car Wars.

HISTORY CON is a world-class affair which garnered a record-breaking attendance of 68,800 people in 2017 and 50,000 people in 2016. With over 300 hundred astonishing exhibits from historic displays to exclusive talks, workshops, and more, this year’s HCON is definitely one not to miss.

HISTORY CON 2018 early-bird ticket purchasers of the HISTORY Maker Pass (PHP 2,500) or HISTORY Maker VIP Pass (PHP 10,000) before July 31,2018 at SM Tickets may enjoy special access to the exclusive special talk, Ancient Aliens ‘LIVE’ Session by headlining international celebrity, Giorgio A. Tsoukalos. HISTORY fans are invited to explore the unexplained with Giorgio A. Tsoukalos and examine some of the world’s greatest mysteries about extra-terrestrial existence throughout history. This special talk will bring together truth-seekers and HISTORY fans on the discussion, debate and exploration up-close with the leading expert himself.