It’s going to be a star-studded pre-Valentine’s Day celebration at ABS-CBN Vertis Tent!

Prince of RnB Kris Lawrence, penultimate pop diva Kuh Ledesma, along with their special guests, dramatic actor Gabby Concepcion and Kuh’s daughter Isabella Gonzalez, will create the perfect musical backdrop for a romantic evening of love songs, nostalgic pop hits and other timeless classics in their concert special dubbed LOVE MATTERS, to be held at the ABS-CBN Vertis Tent on February 13. 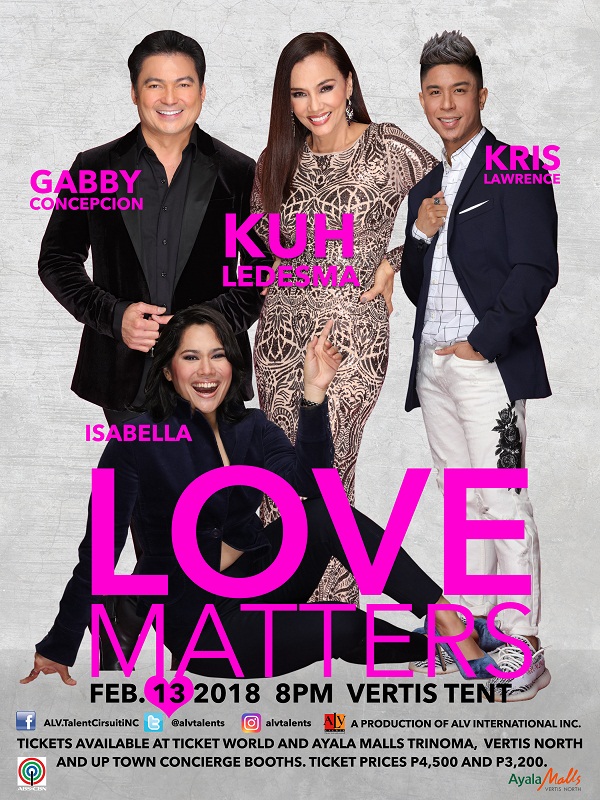 Fresh from the critical success of last year’s jampacked Soul Brothers concert at the Kia Theater, Kris was recently feted at the recently-concluded 3rd Wish Music Awards, bagging the Bronze Wishclusive Elite Circle award for garnering 10 million plus YouTube views for his Versace On The Floor video.”

For her part, Kuh exclaims, “Concerts and shows keep me busy like this Valentine’s. I’m very excited to do this show with Gabby Concepcion. I had the chance last year to spend the holidays with him and his family and some of my closest friends Fe delos Reyes, Cecile Azarcon, and Odette Quesada. I’m excited too to perform with the very talented Kris Lawrence, and of course, it’s always a delight to perform with my daughter Isabella. I’ll be doing a big birthday concert on March 16. Hopefully, a new teleserye towards the second half of the year. I’m now active on social media, ha ha ha, quite a late bloomer in this field. We are developing Hacienda Isabella more. I am working on doing another establishment near Hacienda which I will call “The KuhL Place.” It will have my works of art, sculptures in a garden and a museum of what I’ve done since I’ve started my career. There are other projects that are still on the drawing board and other activities planned for the year which I will talk about soon when I’m ready.”

Meanwhile, the ever-popular ’80s matinee idol Gabby Concepcion will reacquaint millennials with his brand of timeless classics, which he reprised in his second album, Unforgettable. Not known to his legion of fans, he honed his singing prowess under the tutelage of former OPM singer Jam Morales during his long tenure in the U.S.

Not to be outdone, Kuh’s unica hija Isabella says, “I’ve been working on getting back in better health actually, working on changing my lifestyle and holistic health so that I may be spiritually, physically, emotionally and mentally healthy–back on track to launch into my 2nd album project and get back into painting. I’ve also been fixing my #SpillZone Art studio at Hacienda Isabella and resting my voice so that I can record. Your Love, my second album project is in pre-production now, and updates can be found on my official page on facebook.com/iLikeIsabella.”

Whether doing their original solo spots or grooving in unison, these certified concert livewires will surely bring the house down as they merge hearts and souls for Valentine’s Day.

This special pre-Valentine’s day offering kicks off Vertis North’s bevy of special attractions for 2018 as it brings new energy to Quezon City as its up-and-coming central business and lifestyle district.

Last December, Japan Town @ Vertis Ginza opened at the 4th Level of Ayala Malls Vertis North. A first in the Philippines, this new project celebrates Japanese culture in the Ayala Malls. Mallgoers can expect a combination of authentic, young & hip, affordable Japanese food and retail concepts that brings a fresh Japanese experience. Among these concepts are Japan Fudo Street, Tsujiri, and Boteyju.

Another development that continues to be a highlight in Vertis North is the ABS-CBN Vertis Tent, which has been home to several ABS-CBN events since its launch last November. With its seating capacity of 1,200 and a standing capacity of 2,000 pax, it’s the ideal venue for special events, product launches, exhibits, concerts and parties. It is the first large capacity air-conditioned tent venue, made possible by Carrier, the world’s pioneer in providing comfort access in all industries. Carrier is under Alstra, the commercial division of Concepcion Industrial Corporation. For inquiries and reservations for the ABS-CBN Vertis Tent, email: santosgail.atmi@ayalamalls.com.ph or call 755-7900 local 7809.

LOVE MATTERS is a production of ALV Events International in partnership with ABS-CBN Vertis Tent.