Author Madeleine L’Engle‘s beloved novel A Wrinkle in Time is brought to the big screen by visionary director Ava DuVernay from a screenplay by Oscar winner Jennifer Lee and Jeﬀ Stockwell.

A Wrinkle in Time is an epic adventure that takes audiences across dimensions of time and space, examining the nature of darkness versus light, good versus evil and, ultimately, the triumph of love. Through one girl’s transformative journey led by three celestial guides, we discover that strength comes from embracing one’s individuality and that the best way to triumph over fear is to travel by one’s own light.

When Madeleine L’Engle’s young adult novel A Wrinkle in Time was ﬁrst published in 1962, it became an instant classic. The timeless story of a young girl searching the universe for her father enchanted countless readers around the world and spawned four additional books featuring the same characters known as L’Engle’s Time Quintet. In 1963 the book was awarded the Newbery Medal (as the most distinctive piece of work in children’s literature for that year), and its popularity has continued to grow since then. Today the book is available in 35 languages and has sold millions of copies around the world. 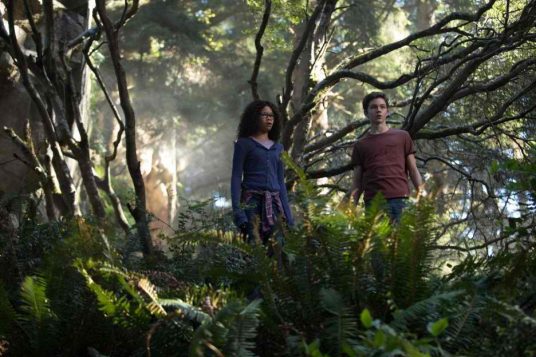 A Wrinkle In Time

“A Wrinkle in Time is an incredibly emotional journey, but it is set against a magniﬁcent landscape and in a world that is beyond dramatic,” producer Jim Whitaker says. “It is epic in its size and scope, but it is also deeply emotional and is entertaining and funny and an all-around great adventure.”

In 2014, the studio approached celebrated screenwriter Jennifer Lee (Frozen, Wreck-It Ralph) about adapting L’Engle’s novel for the big screen, a prospect that thrilled her. “As a child, the book deﬁed anything I had read at that point in my life in terms of imagination,” says Lee. “And it was my ﬁrst introduction to a character like Meg— someone who is dynamic and ﬂawed and unique, who goes through an extraordinary adventure and comes out stronger as a person.”

“A Wrinkle in Time is a book that pushes your imagination to the next level,” says Lee. “The book doesn’t follow a traditional ﬁlm structure in any way. It’s very ethereal, it’s very spiritual and it gets in your head, and when you have that kind of a relationship with a book, it’s okay because that’s what is great about reading: your mind ﬁlls in the gaps with what you want to see. But with ﬁlm I have to make choices.”

“The idea of A Wrinkle in Time really captured my imagination once I read the script,” director Ava DuVernay remembers. “As a woman, the story of a female heroine at the center of a spectacular journey really resonated with me.”

She continues, “A Wrinkle in Time is this beautiful stew of mystery, fantasy, adventure, science, romance, social commentary and spirituality. It’s not o en that we see girls at the center of a story—and certainly not girls of color—amid all these diﬀerent worlds and planets. It really is something out of my wildest imagination.”

“The reason why generations of people have gravitated toward this book is because it has an edge,” DuVernay adds. “It was on the edge of imagination and adventure in 1962, and our goal was to extend that edge through our design and eﬀects to bring Jennifer Lee’s script to vibrant life.”

A Wrinkle in Time is a timeless tale, and the combined perspec ves of DuVernay and Lee add rich layers to the powerful story in a way that lovingly preserves L’Engle’s voice and simultaneously brings a new vision to life.

A Wrinkle in Time is distributed by The Walt Disney Company (Philippines).