The country’s eSports scene continues to heat up in the final stretch to the eSports and Gaming Summit 2018 (ESGS 2018), the biggest gaming convention in the Philippines set on October 26 to 28, 2018 at the SMX Convention Center, Pasay City. 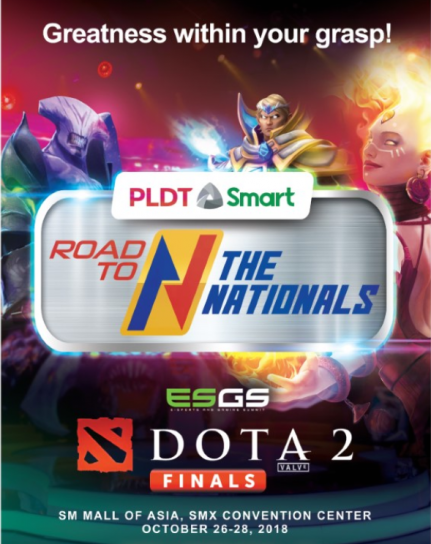 ESGS 2018 will also host the much-awaited grand finals of the ‘Road to the Nationals,’ the nationwide tournament in search of the country’s top DOTA 2 and Tekken 7 players.

Over P1.5 million in prizes at stake

The champions, along with other finalists, will also have a chance to be picked by the founding teams of The Nationals, the country’s first ever eSports franchise model league that serves as a hotbed for Philippine representatives to major international eSports events. These founding teams include PLDT-Smart, Cignal, HappyFeet, Bren Esports, TNC Pro Team, and STI Holdings.

As part of the ‘Road to the Nationals,’ PLDT Home Fibr and Smart are also set to host the country’s biggest Mobile Legends tournament soon.

Since 2013, both PLDT Home Fibr and Smart have been supporting the ESGS, in line with their push to elevate the local eSports industry and provide the ultimate gaming experience for Filipino gamers, fans, and enthusiasts.

Filipino gamers can enjoy lag-free gaming and seamless connectivity in the comfort of their home or on the go – powered by PLDT Home Fibr and Smart LTE, the country’s fastest fixed and mobile networks according to the world-renowned Ookla Speedtest Awards.

PLDT Home Fibr is perfect for multi-player and bandwidth-intensive games like DOTA 2, because it can go as fast as 1 Gbps and enables equal upload and download speeds so gamers can definitely enjoy a seamless experience.

On the other hand, gamers can level up their gameplay and power moves on top mobile games like Mobile Legends, Clash of Clans, and Clash Royale with Smart GameTime 100, which offers up to 300MB per day valid for 30 days for only Php100.

Be sure to catch the country’s best players make their biggest moves at the ‘Road to the Nationals’ finals at ESGS 2018! Get your tickets now at www.smtickets.com.