Christmas at the Araneta Center just got brighter, and here, it truly brings people together!

All roads lead to the Times Square Food Park on November 16 as Araneta Center lights up its iconic giant Christmas tree. The 37-year-old tradition is one of the most anticipated events in the country’s premier lifestyle hub, and is expected to bring as many as last year’s 10,000 people to the event. 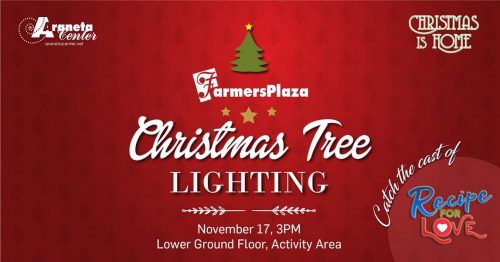 Making this year’s celebration even grander are the celebrities who will headline the event. For the first time ever, Pop Star Royalty Sarah Geronimo will join the festivities and lead the tree lighting. It’s a homecoming of sorts for Geronimo who has celebrated various milestones in her career at the Smart Araneta Coliseum including her sold-out anniversary “This 15 Me” concert last April.
Joining Sarah Geronimo will be comedian and phenomenal box office star Vice Ganda, who is leading the tree lighting for the fifth straight year. Just like Geronimo, Vice Ganda has staged successful concerts at the Big Dome including the Guinness World Record-clinching music fest of her cosmetic line last September.

The 100-foot giant Christmas tree is the centerpiece attraction in Araneta Center this Yuletide season. It features 3,000 LED bulbs and more than 1,500 assorted decors including giant balls, giant bells, lighted poinsettias and a seven-foot star topper.

Because of its enormity and the genuine Christmas cheer it evokes, the giant Christmas tree has appealed to people from all walks of life—from Araneta Center’s most loyal visitors to the Millennials of the Instagram generation who snap pictures of their families and their friends with the tree serving as the background.

The show, which will start at 4 pm, will be hosted by volleyball player-turned-anchor Gretchen Ho, theater actor Benj Manalo and comedian MC. Admission is free.