Typhoon Ompong (intl name: Mangkhut) might be the strongest storm to hit the planet this year but its effects could have been more devastating if not for the massive wall that hampered its greater impact, environmentalists say.

Sierra Madre is the longest mountain range in the Philippines, spanning almost 500 kilometers in length. Its highest peak has an elevation of 1,266 meters above sea level or equivalent to three Petronas Towers of Malaysia stacked together.

Also known as the ‘backbone of Luzon’, the Sierra Madre is home to a large number of threatened biodiversity species such as the Philippine Eagle and acts as a natural shield against typhoons and storm surges.

Ompong’s wind slowed down to 160 kilometers per hour (KPH) from 220 kph sustained winds after encountering the mountains of Sierra Madre with super typhoon category.

Environmental advocates say that this episode is reminiscent of the typhoons that smashed northern Luzon two years ago. 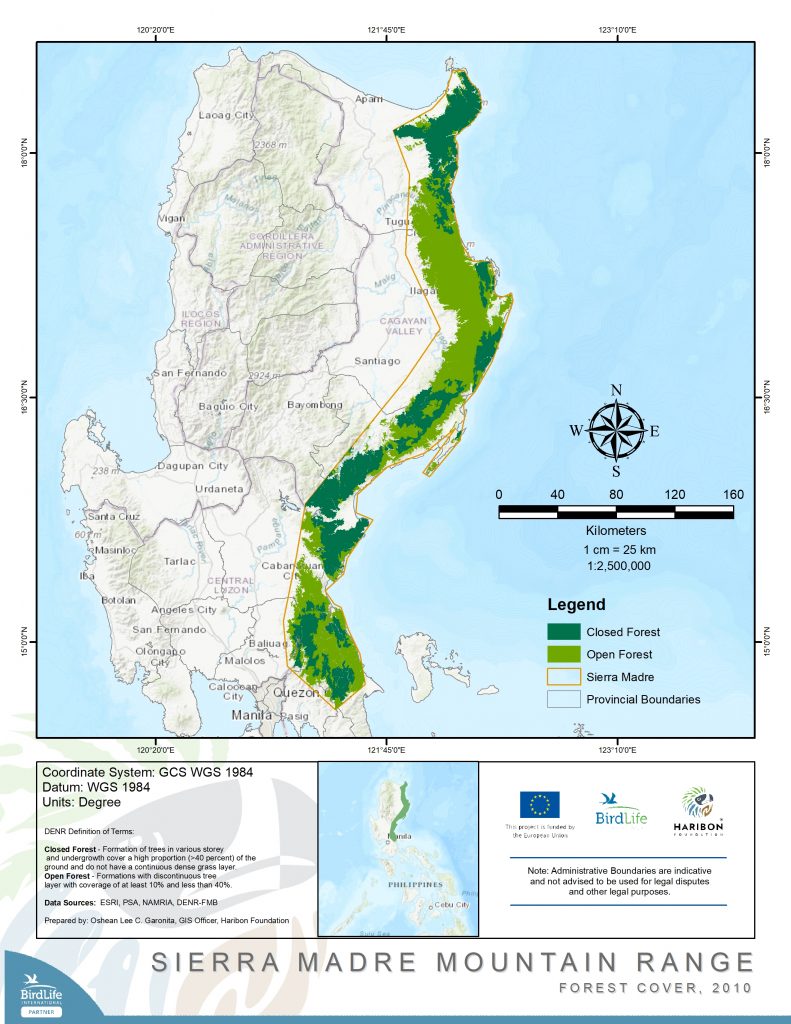 According to Bautista, the importance of the Sierra Madre as a protective barrier against tropical cyclones was unmistakable during the onslaught of Typhoon Karen (intl name: Sarika) and Super Typhoon Lawin (intl name: Haima).

“When super typhoon Lawin hit the North, it was the Sierra Madre mountains that weakened the force of what could be another typhoon catastrophe,” said Fr. Pete Montallana, Franciscan priest and SSMNA president.

From Category 5, Lawin was brought down to category 3 after slamming against the mountainous east coasts of Luzon.

Environmental group Haribon Foundation said that the forests of Sierra Madre are able to lessen the typhoon’s wind speed.

“Since the Sierra Madre has a large surface area with many slopes and curves, it can help break the eye of the cyclone resulting in a slower wind speed,” Haribon Foundation said.

Before Ompong’s landfall on Saturday, Vicente Malano of PAGASA and Cagayan Governor Manuel Mamba cited the role of the mountain range in curbing the effects of an imminent disaster.

“One optimistic thing about this typhoon is that it may be weakened once it hits the Sierra Madre mountain range, which usually serves as a natural barrier,” Molano of PAGASA said.

“We are lucky because we have the Sierra Madre in our eastern borders,” Mamba reassured.

Data from the Department of Environment and Natural Resources (DENR) indicated that in 1988, 1,281,607.36 hectares of land in Sierra Madre are covered with forests composed of: 51% Open Forests, 39% Closed Forests, and 10% Mossy Forests.

In 2010, DENR recorded a total loss of 161,240 hectares of forest in Sierra Madre from 1988 which were mostly attributed to illegal logging activities.

Haribon Foundation says that this forest loss is equivalent to two and three quarters of Metro Manila. Data from the environmental group’s geographic information analysis reveal that notable areas with forest loss can be found in the edges of Sierra Madre in the provinces of Isabela and Cagayan.

Many areas along the mountain range were also converted to Open Forests remarkably in the provinces of Isabela and Nueva Ecija.

Bautista noted that major threats to the Sierra Madre also include continuous road construction and mining activities. According to him, infrastructure projects along these areas destroy virgin forests, ruin natural parks and protected areas, displace indigenous peoples and result in widespread kaingin or slash-and-burn farming.

“When there is heavy downpour, wastes from mining activities also pollute the ocean,” he added.

Hope for the forest

To this day, the 1975 Revised Forestry Code remains as the legislative basis for forest management and utilization. According to Haribon Foundation, current forest laws only address problems of extraction rather than forest conservation and protection.

Advocates of the bill challenges the existing definition of forests used by the DENR.

“Forest is best described as not merely tree plantations but an ecosystem of different tree species sustaining varied plants and animal life,” maintained Haribon Foundation. According to the group, sustainable forest management solutions can only be attained if forests are defined the way they should be.

Amid climate change impacts, environmental groups advocate for the inclusion of critical provisions to forest governance that are essential to protecting one of our greatest mitigators of natural calamity impacts.

“Forests provide us with food, water, shelter, medicine and protection from typhoons such as Ompong. Losing our forests means losing all forms of life,” Haribon Foundation said.