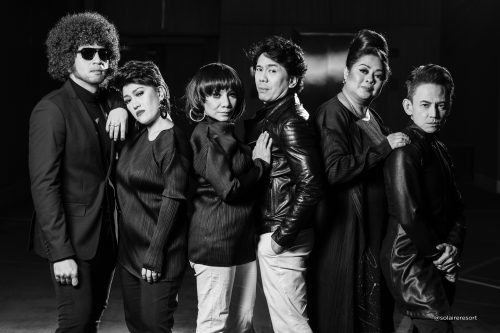 Groove back to the decades of golden music of the 60s, 70s, 80s and 90s in a concert driven by nostalgia and one that will tickle the funny bones. See the Philippines’ premier vocal ensemble on stage with a class act comedian in “Throwback with The Company and Jon Santos” on December 1, 2018 at The Theatre at Solaire.

Starting out as an out-of-college regroup, The Company has evolved in their 3 decades in the music industry. From singing the traditional genres, they decided to move to acapella and vocal jazz as a new challenge to themselves and for the novelty of the pieces. Living to its namesake, The Company reinvented their identities while maintaining the bond that they have developed in the years prior their success. The release of their singles “Everlasting Love”, “Muntik na Kitang Minahal” and the popular love song “Now That I Have You” which is often used as movie theme songs, or in wedding halls, have seemingly immortalized their names. The original members apart from Moy Ortiz, have moved on to pursue the next chapters of their lives but not without passing on the torch to their successors whom have kept their legacy alive and very much felt today.

A stark contrast to the steady melody of songs comes Jon Santos, a powerhouse comedian famous for his impersonations that imprint themselves into the mind. His satirical impressions of the country’s most prominent political personas are complemented by his quick wit, allowing such a seemingly hilarious number to become the controversial stirrer of important conversations. He has transformed himself to the likes of Former President Joseph Estrada, Sen. Miriam Santiago (+), and Batangas Governor Vilma Santos who he admits, is his favorite. Although he became known for his comedic prowess, Jon was able to establish his credibility as a theatre performer who can add more spunk to any character he portrays. He has performed as lead in “Priscilla Queen of the Desert”, and more recently, “Rak of Aegis”. 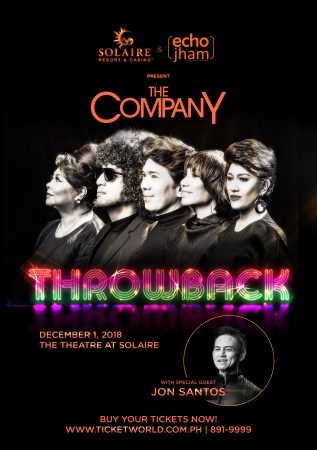 The Theatre at Solaire’s advocacy of bringing Original Pilipino Music (OPM) under the limelight means offering acts that the audience demands, but also presents ingenious collaborations. “This unexpected tandem will highlight another layer of OPM that goes beyond the tunes, lyrics and voices. The Company and Jon Santos together on one stage merges what the Filipinos love most – good music and witty comedy. You will witness a new wave of theatrics that’s as exciting but with more spontaneity and humorous reality jabs.” says Audie Gemora, Solaire’s Director for Entertainment.

With The Company’s vocals injected with Jon’s brand of comedy, expect a night filled with throwbacks with the best “retro” beats that will make you dance, laugh and remember the heydays of the past,

For tickets to “Throwback with The Company and Jon Santos”, you can call TicketWorld at 891-9999.