Only more than a year after Mackie Empuerto, Keifer Sanchez, and Francis Concepcion became officially known as the TNT Boys, the international sensation and bigshot trio will stage their first-ever major concert titled “Listen: The Big Shot Concert” at the Araneta Coliseum on November 30.

The boys are busy preparing for the concert after their latest gig last weekend (October 14) at the President’s Star Charity, a fund-raising charity event, where they sang for the president of Singapore, Halimah Yacob, the third head of state they have performed for after Pres. Rodrigo Duterte and Papua New Guinea prime minister Peter O’ Neill. 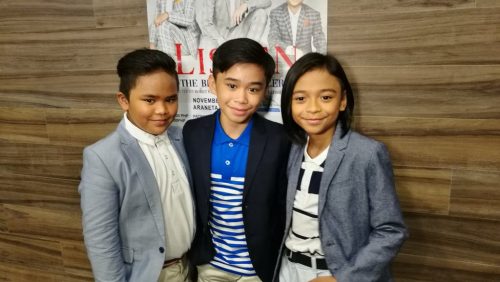 Known for their electrifying belting showdowns and impersonations of legendary music icons, the trio will feature powerhouse solo and group performances in their concert and sing a new repertoire of songs they have not performed in public before.

Following their career milestones, the TNT Boys are giving back to the community as they recently donated their P50,000 cash prize from “The Kids’ Choice” to ABS-CBN Lingkod Kapamilya Foundation Inc.’s Bantay Bata 163 program.

Initially known as grand finalists of “Tawag ng Tanghalan Kids,” Mackie, Keifer, and Francis shot to fame and were launched as the TNT Boys after their singing showdown on “Gandang Gabi Vice” in June 2017 went viral.

Since then, they have travelled the world to perform for different audiences, appeared in “Little Big Shots” in the UK and Australia this year, and won the second season of “Your Face Sounds Familiar Kids.”

This week, the boys are scheduled to fly to the US for an international talent competition.