You are cordially invited to “The Invitation Tour”. Atlantic recording group – Why Don’t We, are excited to be coming to Manila for the first time and will be bringing their headline tour on August 26, 2018 at the Samsung Hall. 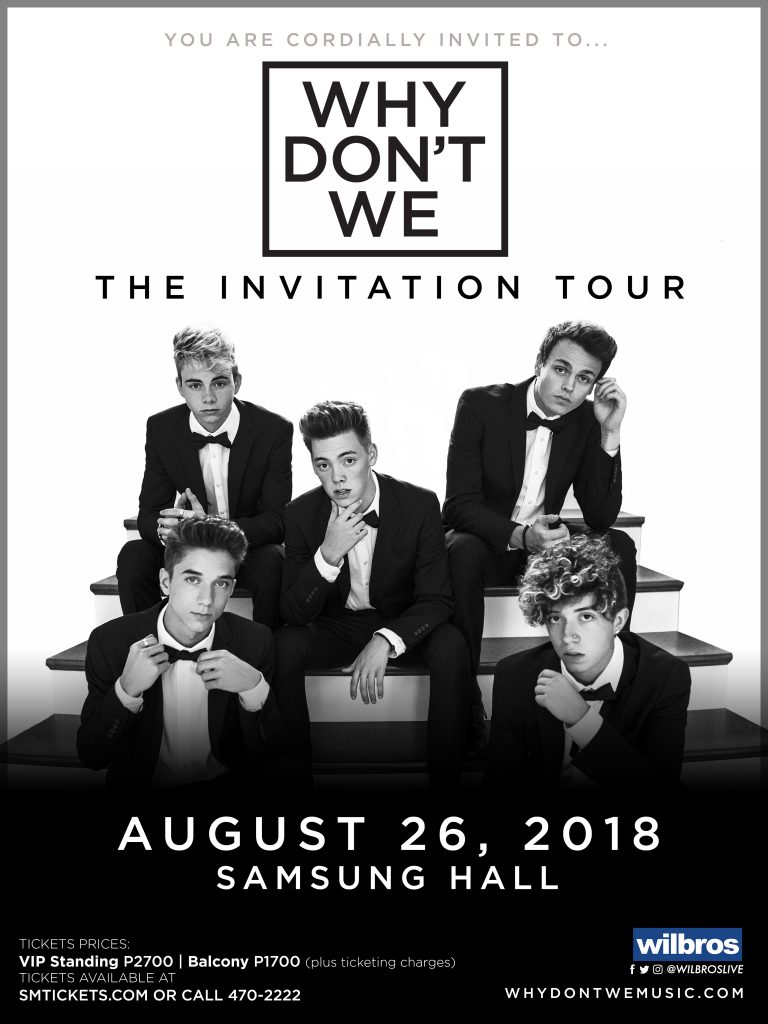 Why Don’t We closed out 2017 on a remarkably high note. In addition to national television appearances on NBC’s “Today” and the syndicated daytime show “Live with Kelly and Ryan,” the young group performed on the entire iHeartRadio Jingle Ball tour, sharing the stage with some of the biggest names in pop music, including Taylor Swift, Ed Sheeran, and Camila Cabello at NYC’s Madison Square Garden. The group was named MTV PUSH: Artist To Watch for the month of November, while simultaneously serving as Radio Disney’s “NBT” (Next Big Thing) featured artist, joining an impressive roster of “NBT” alumni including Camila Cabello, Shawn Mendes, Alessia Cara, Fifth Harmony and more. Likewise, a raft of noteworthy press has been rolling in as of late, including features in Rolling Stone, People, and TIME who enthused that the band’s “…star should only continue to rise in 2018.”

Amassing more than 120 million global audio streams, 2.4 million Instagram followers, and total YouTube views exceeding 145 million with over 1.5 million subscribers in just over a year, Why Don’t We is one of pop music’s biggest breakout stories. Taking an innovative and unconventional approach towards releasing new music and actively engaging their rapidly growing fanbase, the prolific young group – the quintet ranges in age from 16-19 years old – put out four EPs in under 12 months. Following their debut EP “Only The Beginning” and followup “Something Different” EP, it was last summer’s “Why Don’t We Just” EP that first exploded, hitting #1 on iTunes’ “Pop Albums” chart, overtaking artists like Bruno Mars, Harry Styles, and Ed Sheeran. After selling out their first-ever headlining summer tour, the band put out their “INVITATION” EP – released in September to commemorate the band’s one year anniversary – which proved an even greater success, topping iTunes’ “Overall Albums” chart in six countries including the United States. The band’s most recent single “These Girls” made a top 10 debut on the iTunes Store’s “Top Pop Songs” chart late last summer, and now boasts over 13 million worldwide streams while its colorful companion visual has logged over 40 million views at YouTube alone. The band also garnered early press attention from Entertainment Weekly, Us Weekly, and Billboard who named the band in their annual “21 Under 21” ranking, as well as profile pieces on “Entertainment Tonight,” “Extra,” and “Access Hollywood.”

Catch WHY DON’T WE – Daniel Seavey, Zach Herron, Corbyn Besson, Jonah Marais, and Jack Avery – up close and person in Manila at the Samsung Hall. Tickets on-sale on Friday, May 25 via SMTickets.com or Call 470-2222.