ABS-CBN, the country’s leading media and entertainment company, is entering the Philippine theatre scene as it partners with Ten Bridges Media Corp/Atlantis, one of the country’s most successful theatre companies, with three co-productions of award-winning musicals from Broadway.

“ABS-CBN’s venture into theater production, a first for a media and entertainment company, is among the company’s efforts in expanding its experience business. It is another step forward in creating new possibilities for local theatre, which has grown tremendously over the past few years, with its abundance of talent and opportunities locally,” Bobby Barreiro, ABS-CBN head of integrated events, said. 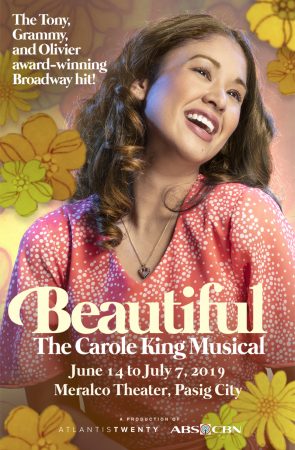 This will be followed by “Beautiful: The Carole King Musical,” which will open on June 14. The original Broadway production has been nominated for seven Tony Awards, including Best Musical.

Based on the book by Douglas McGrath, “Beautiful: The Carole King Musical” has been thrilling theatre-goers with the inspiring true story of one woman’s journey from teenage songwriter to Rock & Roll Hall of Fame inductee. From the string of pop classics she wrote for the biggest acts in music to her own life-changing, chart-busting success withTapestry, the musical takes audiences back to where it all began – and takes them on the ride of a lifetime.

Featuring unforgettable classics such as “You’ve Got a Friend”, “One Fine Day”, “So Far Away”, “Take Good Care of My Baby”, “Up on the Roof”, “You’ve Lost That Lovin’ Feeling”, “Will You Love Me Tomorrow”, and “Natural Woman”, this Tonyand Grammy Award-winning musical phenomenon is filled with the songs widely remembered – and a story not to be forgotten. It opens June 14th at the Meralco Theatre.

“Sweeney Todd” has become a worldwide success since being awarded eight Tony Awards (including Best Musical) for its Broadway premiere, as well as the Oliver Award for Best New Musical. Stephen Sondheim’s and Hugh Wheeler’s (A Little Night Music, Pacific Overtures) tasty, thrilling, theatrical treat has simultaneously shocked, awed and delighted audiences across the world. This radically different production of “Sweeney Todd” also celebrates the shows 40th Anniversary having opened on Broadway in 1979. It will run in October at the Theatre at Solaire.

Atlantis’ Artistic Director Bobby Garcia said that the partnership bodes well for Philippine theater as it helps “create a greater awareness for the Philippine theatre scene and for the wondrous world class talent we have in our country on stage and off.”

The partnership comes as ABS-CBN celebrates its 65th year and Atlantis, its 20th.

More events will be announced soon. For tickets to “Beautiful,” visit www.ticketworld.com.ph or call 891 9999. For more information on show buying and group sales for all shows, contact Atlantis Theatrical at 650 5144 or email at shows@atlantistheatrical.com.