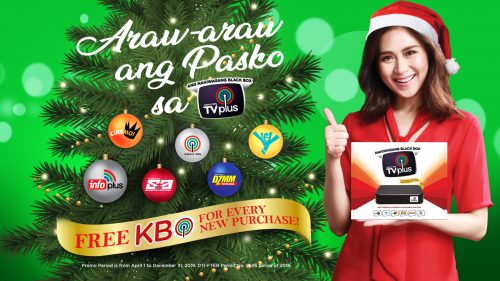 A merrier Christmas awaits families for every new purchase of ABS-CBN TVplus between now and December 31, 2019 because they can enjoy watching together the latest KBO (Kapamilya Box Office) movies–one week, for free.

An exciting KBO line-up that the family can binge watch is on offer this November, Nadine Lustre and Carlo Aquino’s “Ulan,” and Ai-Ai de las Alas’ “S.O.N.S (Sons of Nanay Sabel)” along with other restored and remastered films.

Watch out too for the first TV premiere of the Kathryn Bernardo and Alden Richards team up in “Hello, Love, Goodbye” on December 13, to avail of this promo, just input KBO30 <space> DEC13 <space> your TVplus box ID and send to 2366. There’s also the exciting and fresh movie lineup this December starting with “I’m Ellenya L.,” starring the “Marnigo” tandem of Iñigo Pascual and Maris Racal, the dance musical movie “Indak,” with Nadine Lustre and Sam Concepcion, and the iWant Original action-drama thriller “Mga Mata Sa Dilim,” with Derek Ramsay and Jessy Mendiola.

They can also keep informed as ABS-CBN TVplus recently launched the INFOplus feature, which gives Filipinos real-time and free information on the traffic situation in Metro Manila, updates on weather and disaster, ABS-CBN News’ announcements on work and class suspensions, and price of commodities and TrabaHanap’s job alerts. This latest feature adds to the built-in emergency warning broadcast system (EWBS) that delivers safety alerts and tips on how to stay safe when disasters like earthquakes strikes from ABS-CBN TVplus.

ABS-CBN, which is now transitioning to become a digital company, is the first media and entertainment company in the Philippines that introduced digital terrestrial television (DTT) with ABS-CBN TVplus to transform the viewing experience of many Filipinos. More than 8 million ABS-CBN TVPlus boxes have already been sold nationwide since 2015.

Sarah Geronimo’s lively and colorful Christmas song and dance number to the tune of much loved Filipino Christmas song, “Noche Buena” leading to the official ABS-CBN TVplus commercial was shown for the very first time nationwide in ASAP Natin ‘To. Watch the whole TVC on https://www.facebook.com/ABSCBNTVPlus.