The Armed Forces of the Philippines (AFP) and the Department of Social Welfare and Development (DSWD) recently signed a memorandum of understanding (MOU) that seeks to enhance the cooperation of the two agencies, especially in peace-building programs and ending the threat posed by the conflict with the communists. 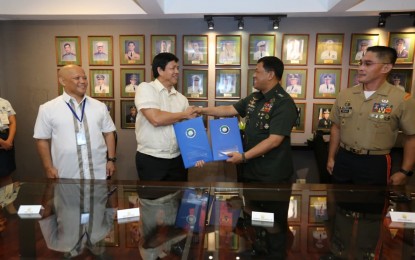 JOINING HANDS. DSWD Secretary Rolando Bautista (left) and AFP Chief-of-Staff Gen. Benjamin Madrigal shake hands after the signing of a memorandum of understanding (MOU) seeking to enhance the cooperation of the two agencies in Camp Aguinaldo on Thursday (July 4, 2019). The MOU includes the formulation of peace-building programs and ending the threat posed by the conflict with the communists. (Photo courtesy: AFP Public Affairs Office)

“The MOU complements efforts to institutionalize Executive Order (EO) No. 70 that adopts the Whole-of-Nation approach, directing all government agencies to collaborate in ending the communist armed conflict,” Madrigal said in a statement Friday.

It also formalizes an ongoing partnership in the effective and efficient delivery of social services to the public, especially those that are affected by calamities and conflict and are vulnerable to radicalization.

Executive Order 70, signed by President Rodrigo Duterte in December last year, mandates the creation of the National Task Force to End Local Communist Armed Conflict (NTF-ELCAC) and directs all government agencies to render all the necessary support to peace-building programs, plans, and activities for the campaign.

During his assumption as AFP chief, Madrigal committed the AFP’s support to the task force, stressing the need for government agencies to come together to eradicate the root causes of conflict and violence.

“We have made significant progress and have made headways in our campaign to end insurgency. But to reach what we can call a complete victory, we need to create communities that are conflict-resilient and we need local and national government agencies to attain this,” he added.