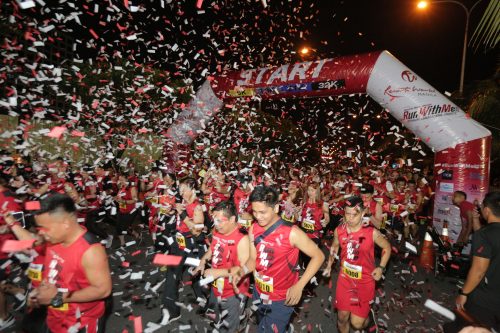 Now on its fourth year, Resorts World Manila’s (RWM) award-winning annual celebrity-led fun run for charity Run With Me is about to become bigger and better as it opens registration for the August 25 event at the SM MOA concert grounds.

Coinciding with celebrations of the integrated resort’s first decade in the industry, this year’s Run With Me X will again open four race categories at 32K, 21K, 10K, and 5K distances, with organizers expecting over 8,000 runners to participate.

Registration period is open until August 10, with corresponding rates at Php1,600 for 32K; Php1,400 for 21K; Php1,200 for 10K; and Php1,000 for 5K. All race kits will include singlet, race bib, timing chip, and hydration bottles. Race kits will also include finisher shirts and RWM commemorative finisher’s medals for 21K and 32K runners. 10K runners will likewise get an RWM commemorative finisher’s medal.

“We’re very thankful to RWM because it is really a big help for the orphans’ education,” said General Victor Bayani, Executive Director of HERO Foundation of last year’s run. “We were able to increase the stipends we provide for the elementary and high school students,” he added.

“I’m very grateful to RWM for having included us in the 2018 Run With Me charity race. This is a tremendous help to a lot of poor kids who want to finish their studies and get jobs after,” said Mark Magsalin Principal of Fr. Pierre Tritz, ERDA Tech Foundation in Manila, another charity beneficiary from last year.

Interested parties may register online via www.runwithme.ph, via the RWM Mobile App, selected Olympic Village branches, or at Sportshouse Mall of Asia.