The award-winning song is especially close to many Filipino hearts because Disney tapped Filipino Broadway star, Lea Salonga, to provide the singing voice of the brave princess Jasmine in the 1992 animated film. 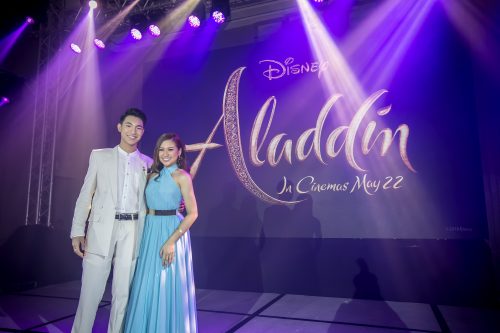 Now, Disney is reimagining the beloved tale of Aladdin and along with it, revamping its timeless music for a new generation. In the Philippines, Disney is passing on the legacy of Aladdin’s music to two of the country’s young vocal powerhouses, Morissette and Darren Espanto, who worked together on a localized version of the film’s most successful song, ‘A Whole New World’.

“Here at Disney Philippines, we collaborate with like-minded brands and individuals to deliver the best experiences to our Filipino fans in a locally relevant manner. Through our localization efforts, we continue to build connections with Filipino fans to bring them even closer to their favorite characters and stories, such as Aladdin”, shared Veronica Cabalinan, Country Head of The Walt Disney Company Philippines.

At a special listening party with the media, Morissette and Darren Espanto treated guests to an amazing live performance of the much-anticipated duet. Here, Disney also gave attendees a first glimpse of the magical music video.

“I grew up with Disney, listening and singing along to the songs of so many of their movies. I never would have imagined that I would be given the opportunity to sing one of their most amazing classics. It’s truly a dream come true to work with a brand that has brought me so many happy childhood memories and now, to be a part of the childhood experiences of an entirely new generation,” shared Darren.

For Morissette, taking on the project was a great responsibility, “The fact that the original version was sung by the legendary Lea Salonga, makes being chosen for this project truly an honor. It is a once-in-a-lifetime opportunity. I wish our rendition of this beautiful song makes people happy.”

Walt Disney Pictures’ “Aladdin” opens in Philippine theaters on May 22, 2019. Tickets to the film will be available for sale starting May 10. Use #AladdinPH to join the conversations online.