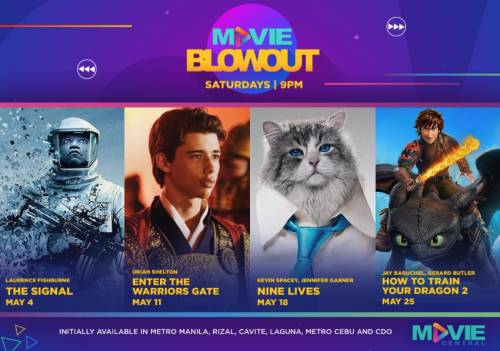 Airing this May 11 is the action and fantasy movie, “Enter the Warriors Gate.” Join Uriah Sheltion as he plays the video gamer Jack who will be magically transported to China after opening the chest given by an old Asian man. See him fight the Barbarian king played by Dave Bautista and how will he return home.

Kevin Spacey turns into a cat in the comedy movie, “Nine Lives” after meeting an accident with the animal he bought for his daughter. Find out how his outlook in life changes from that of a workaholic as he lives the life of a cat. Will he have the chance to be human again and a second shot at being a good father to his family? Watch it this May 18.

Meanwhile, Hiccup (Jay Bruchel) and his loyal dragon, Toothless, return in the second movie of the “How to Train Your Dragon” trilogy. Five years after he changed the his community Berk, Hiccup finds himself in a secret cave that houses wild dragons. Little did he know that this is now the home of his mother, Valka played by Cate Blachett. However their reunion gets disrupted when he needs to fight against the power-hungry warrior, Drago and protect his people.

Watch all these films in the Movie Blowout block of Movie Central every Saturday at 9:00 pm.