Emirates Group Chairman and Chief Executive Officer HH Sheikh Ahmed bin Saeed Al Maktoum recently unveiled a specially commissioned art piece named ‘From the Heart of Zayed’ in honor of the founding father of the United Arab Emirates (UAE). The art piece was designed and created by Ely Graf, a Filipino artist based in Dubai.

The art piece was commissioned by Emirates Group to pay homage and celebrate the legacy of the late UAE founder HH Sheikh Zayed bin Sultan Al Nahyan, who continues to inspire present and future generations of Emiratis. The artwork will be on permanent display in the atrium at Emirates Group Headquarters and is part of a number of initiatives done this year to celebrate the ‘Year of Zayed’.

Ely Graf is just one of the many Filipino talents who have been making a name for themselves while contributing to the Dubai art scene, joining the likes of Nathaniel Alapide, who is known for his intricate sand art, as well as fashion designers Michael Cinco, Ezra Santos, and Furne One, who have been designing fashion pieces for some of the biggest names in Hollywood, to name a few.

The UAE has become a second home to more than 650,000 Filipinos, of which 450,000 live in Dubai, who moved to Dubai to prosper and pursue career opportunities. Owing to the UAE’s business-friendly environment and its melting pot of more than 200 nationalities, the country is a fertile ground for inspiration. The UAE’s creative industries including graphic design, fashion design, fine arts, music, web design, animation and even architectural design all employ talented Filipinos who have contributed to the growing sophistication of its business sectors and competitiveness on the world stage. 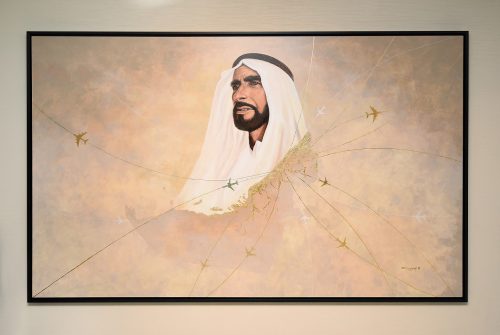 ‘From the Heart of Zayed’ is comprised of three elements. The first element establishes the face of HH Sheikh Zayed, father of the Emirati nation, gazing firmly to the future. His golden bisht, a traditional Emirati garb, symbolises honour and nobility, and follows the outline of the UAE map, which he united. Dubai is highlighted by Emirates’ aircraft and extensive network that connects the world, all flowing out of his bisht.

The art piece used a variety of techniques and materials to portray HH Sheikh Zayed. Graf used acrylic paint on stretched canvas and the art piece took him 20 days to complete. Its colour palette was inspired by a spectrum of the earthy tones found throughout the UAE, complemented by the use of gold leaf symbolising the regal embroidery that accents the traditional Emirati bishts.

Graf is a well-known Filipino artist who has been living in Dubai for the past 10 years. He is known for taking inspiration from architecture and futuristic developments of the UAE. He has conceptualised and has been behind numerous artistic works in Dubai such as HH Sheikh Mohammed bin Rashid Al Maktoum’s book cover for ‘The Journey’, along with twelve illustrations of Sheikh Zayed and Sheikh Mohammed within the book. He was also commissioned to create the UAE Ministry of Education’s 2018 curriculum book covers.