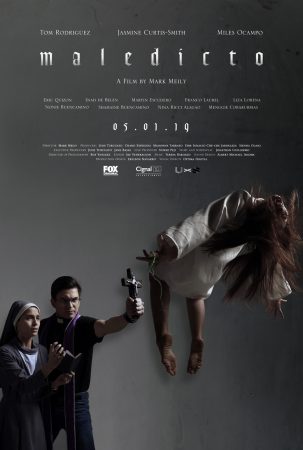 Home to the most popular series and Hollywood movies, FOX is about to delight viewers yet again with their newest must-watch.

Fox Networks Group Philippines is poised to give us a good scare with it’s first ever locally-produced horror film Maledicto, set to show in cinemas nationwide this coming May 1. Co-produced by Cignal Entertainment and Unitel, and directed by Mark Meily, Maledicto is a chilling tale that will surely get under your skin.

“Maledicto is a really big feat for FNG, being the first ever film we’ve produced locally, with an all-Filipino cast at that. With Maledicto under our belt, we’re hoping to elevate Filipino cinema to one of a Hollywood pedigree.”

Maledicto stars Tom Rodriguez as Father Xavi, a former psychologist who becomes a skeptical exorcist following the tragic death of his sister, Mara (played by Inah de Belen). He meets Sister Barbie (played by Jasmine Curtis-Smith), a young nun who has the gift of charism. Together, they face the case of Agnes (Miles Ocampo), a seemingly perfect teenager who starts manifesting demonic behaviour that rocks the foundations of the church.

The lead actors have also expressed enthusiasm on being part of FOX’s first film, saying it was an opportunity to play roles that stray from the norm of romance and loveteams. They have happily accepted the challenge, and are excited to bring the characters to life.

Turcuato adds, “We have always prided ourselves in creating original content that would speak to our audience on a personal level, and I feel that Maledicto will do just that, because faith and belief are things that are innate in almost everyone. More than a horror movie, it is an invitation to look inside ourselves and assess what we truly believe in. We hope that this film will offer a fresh perspective.”

Maledicto premieres May 1 in cinemas nationwide.