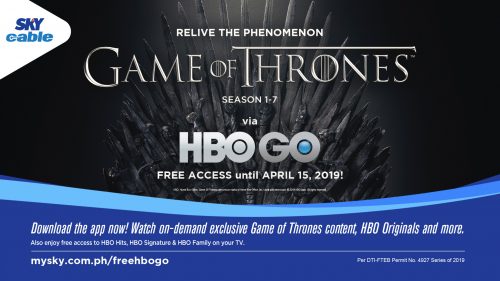 An epic throwback awaits “Game of Thrones” fans as SKY exclusively offers its subscribers free access to HBO GO, giving them a chance to relive the phenomenal television series anytime, anywhere until April 15.

The offer will delight all kinds of viewers, whether they’re new to the world of Westeros or already hooked to the behemoth series, as all seven seasons are available for streaming.

As the show’s previous season saw the Night King heading to Eastwatch with the undead Viserion and the White Walkers marching South, this season is set to bow out with its biggest episodes ever. With only six episodes, Season 8 is expected to be packed with epic turns of events, including its biggest battle—bigger than what many fans consider its most monumental, the massacre at Hardhome. Fans can also anticipate the formation of new alliances.

HBO GO is HBO’s an online streaming service that gives subscribers a chance to watch and enjoy the world’s best movies, HBO Originals and more through the website or the mobile app. Subscription to the app also gives SKY subscribers free access to cable channels – HBO Hits, HBO Family, and HBO Signature.

The free access to HBO GO is available to all digital SKYcable and SKY Fiber Unli Broadband + HD Cable TV Plans 8Mbps and 16Mbps subscribers nationwide with HBO channel in their cable line-up. Download the HBO GO app now and register to catch up in time for the premiere of Season 8 on April 15, at 9:00AM. Visit mysky.com.ph/freehbogo for details.

For more exciting updates on “Game of Thrones,” log on to mysky.com.ph/got.