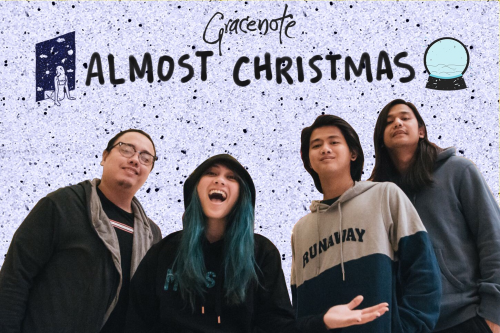 Fans of electro-pop-rock band Gracenote were in for a big surprise last week as the band made two major announcements.

After 12 consecutive days of live streaming beloved Christmas songs on their Facebook page, the surprise drop of their holiday EP “Almost Christmas” (under Universal Records) was announced on November 8, just in time for all the Christmas festivities.

Comprised of five tracks, the EP features not so typical Christmas songs you would expect to hear during the season. From the first track, “Christmas Break” to it’s last “Haha Happy New Year,” fans will get the feeling of anticipation of the holiday highlights all while having a rocking time. In addition to the two songs celebrating the season, the EP also features three more tracks “Loud Night,” “Almost Christmas pt. II, and “Single Bell” that play around with well-beloved holiday tunes, giving it an extra kick of the Gracenote flavor.

The EP was dropped just after the announcement of their 3rd studio album, “Small World.” The upcoming album will comprise of 15 tracks, which includes previously released track “Here I Go Again,’ and is slated for release on February 29, 2020. The album will be packaged together with an official shirt and poster, with it’s pre-order date to be announced soon. According to the band, this album will serve as a showcase of their journey, hinting that it will consist of tracks that features a “culmination” of they’ve done before but with a fresh new take.

Coming off the success of their latest single “Baso at Bote” and these surprise announcements, fans will not only have a great holiday season, but a lot to look forward to in the coming months as well.

Team Orange 01 Jun 2020 0 comments
Quezon City residents may opt to receive their supplemental financial assistance from the local government safely, securely, and conveniently through GCash, the leading mobile wallet in the Philippines. Through GCash,…