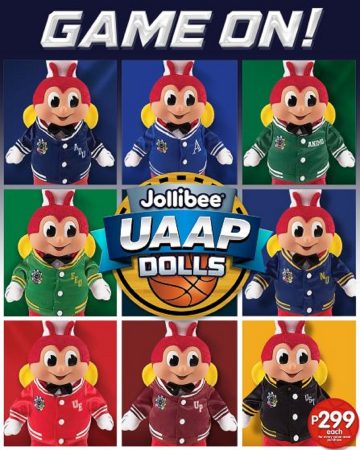 With Season 82 of the University Athletic Association of the Philippines (UAAP) underway, fans of the 8 participating schools are all out in cheering for their favorite varsity teams!

For the past years, the UAAP Basketball Season has become one of the most anticipated events in the country, gathering students, alumni, and sports enthusiasts alike to some of the most exciting rivalries in the history of Philippine collegiate basketball.

This season, Jollibee is joining in on the fun competition with a special edition offer that will surely take the UAAP fans’ anticipation to even greater heights.

From now until October 31, fans can go all out in cheering for their teams when they avail of the all-new Jollibee UAAP Dolls! This limited-edition merchandise will surely amp everyone’s excitement as they watch their most-awaited games this season.

Fans can now show off their school pride as they wave their UAAP Jollibee Dolls during game time to rally behind the Soaring Falcons, support the Blue Eagles’ “One Big Fight”, celebrate the “Animo!” spirit of the Green Archers, and bring out the fierce game of the Tamaraws.

With their Jollibee UAAP Dolls, fans can also cheer on the Bulldogs as they turn back their opponents, fire-up the spirit of the UE Red Warriors, show some love for the Fighting Maroons, and support the Growling Tigers as they claw back into contention.

Go #AllForMore and show your joyful school spirit this UAAP Season 82! Cheer your favorite team to victory with the all-new Jollibee UAAP Dolls for only P299 for every Jollibee value meal purchase. Promo is available for dine-in, take-out, drive-thru, and delivery, in selected Jollibee stores nationwide.