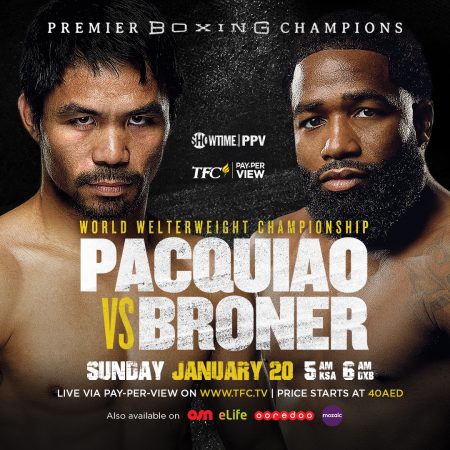 Boxing enthusiasts already have their bets as the bout between Manny “Pacman” Pacquiao and Adrien “The Problem” Broner draws near, which can be seen in the Middle East via Pay Per View (PPV) on January 20, brought exclusively by Showtime and The Filipino Channel (TFC).

On the other hand, Broner (33-3-1, 24 KOs) has never been this focused and is giving his 100 percent in the training for the bout, said his coach Kevin Cunningham in an article by Independent.co.uk.

As the opponents show grit more than a week before the match, spectators look forward to witnessing a gripping and all-out fight from the two boxers.

Watch it LIVE via Pay Per View (PPV) on TFC Online ( www.TFC.tv) by subscribing for only AED 40. Also available on OSN, eLife, and Ooredoo.

Also catch it on Ooreedo by subscribing to PPV for only USD 20 (QAR 70). Contact their hotline number 111 to subscribe.

For more updates on TFC’s upcoming shows and events, visit emea.kapamilya.com or facebook.com/TFCMiddleEast.