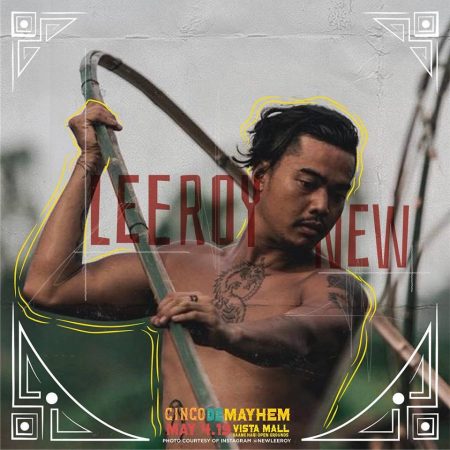 The General Santos City-born contemporary artist and young visionary has dabbled into different platforms from film, theater, product design, and fashion. His proclivity to the arts has propelled him to be trained originally as a sculptor but his innate knack for transforming otherworldly ideas into thought-provoking and eye-catching pieces has brought him to try his hands on various mediums from production design for film, wearable, sci-fi art for known fashion designers and muses, including Lady Gaga, down to 3D mock ups for commercial purposes. His creative practice has produced a comprehensive body of work that is celebrated locally and in the global scene.

New has since exhibited his unique worldview as an artist at the Singapore Biennale in 2008 and the Fukuoka Asian Art Triennale in 2009. Kicking off 2019, Pinto International, headquartered in New York, proudly headlined their quarterly exhibition series with his “Aliens of Manila: New York Colony”, a collection of sculptures crafted from found materials like flexible conduit, food covers, cable ties, and fiberglass. This serves as the international arm of his 2014-born series, “Aliens of Manila”—a collaboration with friends in absurd costumes thrust in urban Manila, with great inspiration to New York street-style photography.

But it was his larger-than-life public installations that have gotten his work and his unique vision a second look from the arts scene and the public eye. From his Balete series, made out of industrial pipes woven together using cable ties, his post-apocalyptic sculpture park highlighted by a giant bamboo spaceship in the Paoay Sand Dunes, to the floating performance garden at the Pasig River made in collaboration with the Burning Man Global Arts grant, New has since etched a mark that is distinctly his.

In collaboration with fellow conceptual artist Georjanno Abenoja, New is expected to mount his large-scale art crafted from bamboo, neon lights, mesh, rope lights, and conduit as centerpiece to this mecca of music, food, drinks, and visual arts. Abenoja is a young painter, concept artist, character designer, and illustrator whose aesthetic was nurtured by his inclinations for surrealist images of mutants, monsters, and cyborg babies. Abenoja has been New’s constant collaborator in various exhibitions like the Pasig City mural, the Kult Gallery, and even the alternate universe they have created for local series Bagani. “I am excited to bring my perspective and vision to build this fascinating world brought by Cinco de Mayhem. It’s not everyday that you get to be part of something as grand and unique as this,” New shares.

Presented by premiere events producers ProMedia Productions, CDM promises a unique musical experience bringing together top local artists and DJs in a vibrant and festive celebration of music, youthful spirit, community, and of life. With New’s art centerpieces, along with a roster of fun activities brought exclusively by partners, there’s no doubt CDM will become a musical experience like no other.

“We are definitely thrilled to bring game-changers who are making their mark not just in the music scene but also in the visual arts. Not to mention, we have generous partners who are one with us in setting the tone for this vibrant celebration,” shares festival creative director Alexander Diaz.

CDM will be headlined by local performers James Reid and Nadine Lustre, along with the rest of the Careless Music Manila crew: Astrokidd, Massiah, King WaW, and Curtismith, together with rising and legendary musicians and DJs from Quest, Kiana Valenciano, Divine Smith, DJ Euric, Deuce, and Nix Damn P. Spicing the lineup is the country’s first and only female MC Marga Bermudez, along with special performances from event partner, RedBull’s award-winning performers.

“We want Cinco de Mayhem to be fresh, young, and diverse to cater to a wide crowd that enjoys good food, good music, and a good experience. This will be an epic night that would spell how we mount many more Cinco de Mayhems to come, to cap off your summer,” said Lahaina Mae Mondonedo, Director of Operations.