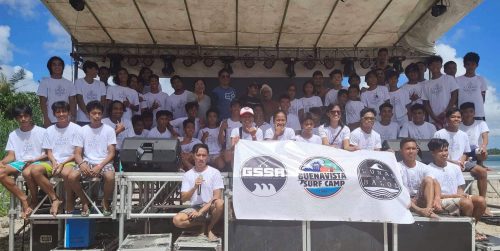 Lunad sa Balod, a yearly competition organized by the Gubat Sorsogon Surf-riders Association (GSSA) is putting Sorsogon on the surfing map. Surfers from all over the nation headed to Gubat to surf and outdo each other with their surfing skills. Over the years it has not only attracted local surfers but international surfers as well.

This year, a wide variety of activities was present for both surfers and non-surfers. Music was provided by several local indie bands. Philippines rock band Franco also gave the people of Gubat, a concert to remember. A beach clean up was also done to ensure that the Buenavista Surf Camp was clean after the event.

This year, the female surfers seem to have stolen the show. Vea Estrallado of Gubat, Sorsogon made a return and defeated fellow surfers Daisy Valdez and Ana Mae Alipayo both in the longboard and shortboard category. The young surfer is easily making a name for herself in the surfing world since joining the Lunad sa Balod surfing competition.

Lunad sa Balod founder Bidge Villaroya said that he enjoyed hosting the event and meeting several of the country’s top surfers. He hopes to invite more surfers to Lunad sa Balod. He would like to educate the new surfers about Gubat, Sorsogon surfing culture and to join their beloved surfing community.

Organized in partnership with the locals of Barangay Buenavista, the Local Government Unit of Gubat, Sorsogon, the Provincial Government of Sorsogon and as part of the province’s annual Kasanggayahan Festival celebration, Lunad sa Balod brings in a huge number of visitors and participants. Hotels and resorts are fully booked and restaurants are jam-packed with walk-in guests coming in for this three-day event.

Through the years, Lunad sa Balod has strengthened the bonds within the Philippine surfing community. Competitors come from all over the country not just to compete but also to enjoy time with friends from different surf spots. A high caliber judging team and technical staff guarantees the quality level of the surf competition. Lunad sa Balod is also only one of the few national surf competitions with women’s categories. And in support of the Filipino surf athlete, winners will receive a total of P303,000 in cash prizes and up to P100,000 worth of goodies and products.