On this special day, loyal customers, including a number of first-time diners, enjoyed P15 off on their Chicken Paborito Value Meals in all Mang Inasal stores nationwide. The promo discount was inspired by Mang Inasal’s 15th year milestone.

Among the hearty diners that day was Bernard Garnodo who came with six kids, two of whom were his children. They were big fans of Chicken Paborito Value Meals so they gladly joined the celebration.

Belle, a call center agent, went to dine in Mang Inasal with her workmates, as they love to feast on their favorite Chicken Paborito Value meals as a group or a squad. They said they particularly like Mang Inasal because of their grilled chicken, the unlimited rice offering and the feeling of being at home whenever they are at the store.

“Our avid customers did not only increase foot traffic in our stores, but also helped us move closer to our goal of making Chicken Inasal a national icon. Thanks for joining,” he said. 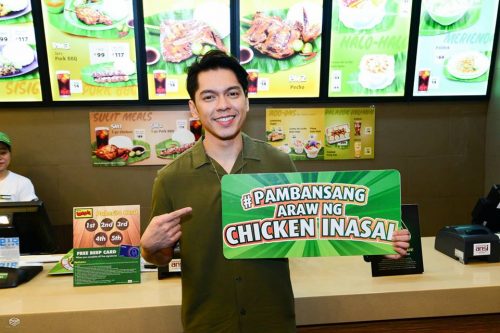 On its second year, the Pambansang Araw ng Chicken Inasal also marked the launch of Mang Inasal’s newest celebrity endorsers – Carlo Aquino and Angelica Panganiban. Carlo dropped by Mang Inasal stores in Market! Market! and The Ayala Circuit Mall while Angelica made an appearance at the Marikina Riverbanks store.

Carlo and Angelica topbill the newest Chicken Inasal television commercial launched a day after Pambansang Araw ng Chicken Inasal. The 15-seconder capitalized on Cargel’s onscreen chemistry, making it the perfect commercial to usher in the love month of February. “Angelica and I are thrilled to be part of the Mang Inasal family. They are really taking good care of us. And I really love their Chicken Inasal. And even before, I would consume a lot of serving of rice. Also, I eat with my hands, para mas solb sa sarap,” Carlo shared.

In behalf of CarGel, Carlo also expressed his appreciation for the support that their fans have been giving them. With the success of this year’s celebrations, customers can expect more surprises in next year’s Pambansang Araw ng Chicken Inasal.