East Zone concessionaire Manila Water led volunteers from the Ayala Group as they joined the ‘Battle for the Rivers and Esteros’, a campaign spearheaded by the Department of Environment and Natural Resources (DENR) that involves the simultaneous clean-up activities of creeks, esteros, and tributaries that all drain into Manila Bay.

Volunteers from the Ayala Group, led by the Manila Water President and CEO Ferdinand Dela Cruz as they joined the ‘Battle for the Rivers and Esteros’, a campaign spearheaded by the Department of Environment and Natural Resources (DENR).

More than 500 employees from the Ayala conglomerate have volunteered to clean Hagonoy creek in Taguig City, one of the many waterways that the DENR targets to revive under the campaign which aims to involve communities and empower them to protect their own waterways.

According to Manila Water President and CEO Ferdinand Dela Cruz, the Ayala Group’s participation hopes to strengthen the company’s commitment in helping the country restore its precious waterways. 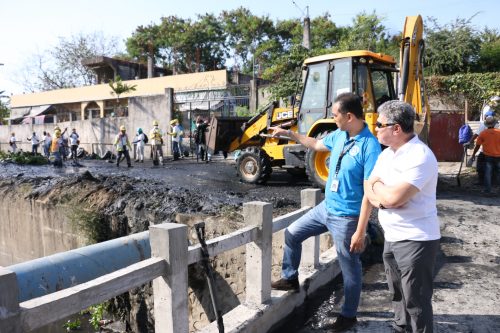 “Manila Water’s Toka Toka is our program that aims to clean and revive our waterways through these important four ownable acts: solid waste segregation, desludging every 5-7 years, connecting to sewer line and educating the community,” he said.

Manila Water Advocacy and Research Department Head Fernando Busuego III said the 12-month clean-up activity is part of Manila Water’s Toka Toka campaign, which promotes environmental protection and seeks to revive the health of rivers and water bodies by reducing pollution. Toka Toka is the first and only used water movement in the Philippines that encourages individuals and communities to do their share in environmental protection.

“As a pioneering environmental protection advocate, one of our ‘toka’ or share is to consistently engage in clean-up activities and educate people on how they can contribute in protecting the environment,” Busuego added. “This is the reason we launched our Toka Toka advocacy program. We encourage communities to put in their respective stakes for cleaner and healthier surroundings.”

Since its inception in 2012, the program continues to foster and strengthen partnerships with various national government agencies, local government units, (LGUs), and the private sector to further advance the movement.

Ayala subsidiary Makati Development Corporation also deployed a loader and three excavators that facilitated in the collection and disposal of waste collected during the clean-up.

Aside from its employee-volunteers, Manila Water also provided other cleaning implements such as shovels to the local government units of Pateros and Taguig. 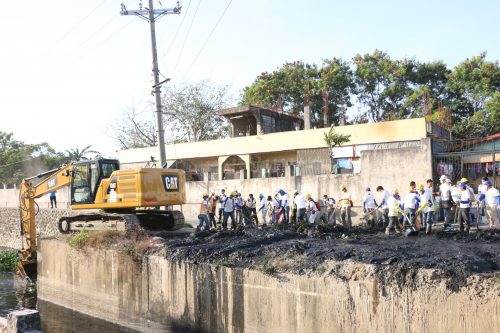 According to DENR Roy Cimatu, the esteros account for a great deal of the pollution load of the Manila Bay. It is the key to the restoration of Manila Bay.

Representing DENR Sec. Roy Cimatu, National Mapping and Resource Information Authority (NAMRIA) Administrator Usec. Peter N. Tiangco stressed that what we are launching today is the battle for the esteros, which is indispensable in winning the battle for Manila Bay. “The esteros account for a great deal of the pollution load of Manila Bay. It is key to the restoration of our beloved bay. The esteros have been a long running headache despite many years of our Adopt-an-Estero program whereby communities and LGUs and business enterprises adopt a specific estero or segments thereof for continuing clean-ups, some dating back to 2010”, Tiangco explained.

The Battle for Rivers and Esteros includes a series of activities from simple and regular conduct of cleanup on garbage and debris, removal of silt by dredging, to introduction of bioremediation, infrastructure improvement and other engineering interventions, such as trash traps and silt curtains.