In the past two years, McJim has collaborated with Cahilig in creating memorable, viral, and critically acclaimed short films that won the hearts of millions of netizens across the globe. Three of the short films titled Pitaka, Bag, and Sinturon have competed in over 60 prestigious international film festivals, winning four awards so far, including the Best Digital Ad (Branded) in the 2018 Catholic Mass Media  (CMMA). 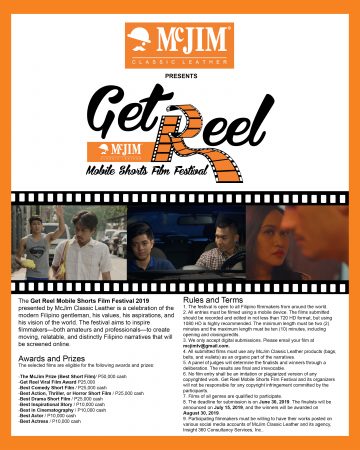 This time, McJim is engaging more filmmakers in the creative process.

Eligible entries will have the chance to win a total of P190,000 worth of cash prizes in eight different categories, including The McJim Prize for the festivals best short film.

The festival is open to all Filipino filmmakers. All entries must be filmed using a mobile device and recorded, submitted, and edited in not less than 720HD format, although using 1080 HD format is highly recommended. The minimum length must be two (2) minutes and the maximum length must be ten (10) minutes, including opening and closing credits.

Get Reel accepts films of all genres. However, they must use any McJim Classic Leather products (bags, belts, and wallets) as an organic part of the narratives. Submission must be done via email at mcjimtv@gmail.com.

A panel of judges will determine the finalists and winners through a deliberation. The results are final and irrevocable. No film entry shall be an imitation or plagiarized version of any copyrighted work. Get Reel Mobile Shorts Film Festival and its organizers will not be responsible for any copyright infringement committed by the participants.

The deadline for submission is on June 30. The finalists will be announced on July 15, and the winners will be awarded on August 30.

Participating filmmakers must be willing to have their works posted on various social media accounts of McJim Classic Leather and its agency, Insight 360 Consultancy Services, Inc..