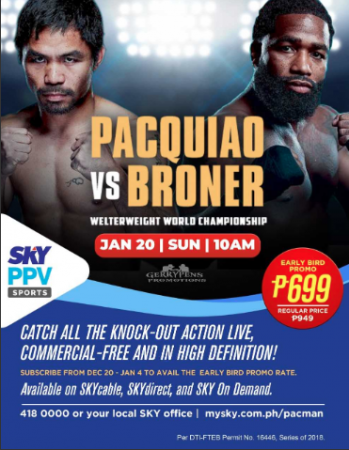 SKY Sports Pay Per View is set to unleash slam-bang boxing action this January as it features skirmishes between Manny Pacquiao and Adrien Broner for the WBA Welterweight title this January 20, 2019.

SKY subscribers nationwide who will avail of the “Pacquiao vs. Broner” fight on or before January 4 can enjoy the early bird rate of Php 699.00, instead of Php 949.00. The fight airs live, commercial-free, and in high or standard definition with a replay on the same and day right after the live event.
Pacquiao (60-7-2, 39 KOs) who recently turned 40, is out to prove to the world that he is not yet done as he faces the 29-year old boxer for his 70th fight. This fight also serves as a reunion with his trainer Freddie Roach who confirmed that he has agreed to work again with Pacquiao.

The American boxer Broner (33-3-1, 24 KOs), a former four-division titleholder, is hungry for a win since he lost to Mikey Garcia in July 2017, and got a draw in his fight with Vargas last April 21.