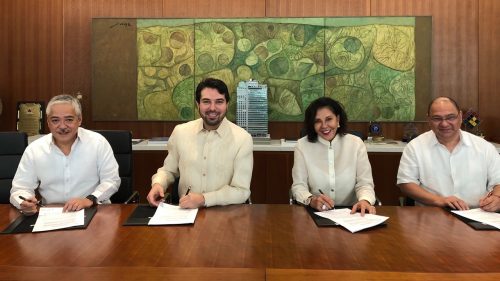 Piip Mobile, the go-to mobile application for the best location-based promos and deals, recently renewed its partnership with The Araneta Group, building on the trust, success, and opportunities that both brands have achieved together since 2017.

This renewed partnership entails more collaborations between the Araneta Group and Piip, following the successful engagements from 2018. Piip will continue to provide more support to Araneta Center merchants with the app proactively marketing their products and services, making them more visible to their target consumers.

“Araneta Center is happy to renew this collaboration with Piip in 2019. With an improved Piip app, we look forward to further working with them to give our lessees a robust platform to attract more customers. Piip provides a convenient platform for our growing number of tech-savvy customers who rely heavily on their mobile phones for their lifestyle choices. Piip allows our shoppers to enjoy features and promos suited to their needs and gives them an online tool to enjoy new discoveries. The Araneta Center and Piip’s partnership offers an innovative shopping experience and comes with a huge benefit to our lessees and loyal shoppers,” The Araneta Group, SVP for Business Development Mr. John B. Castelo said.

With the Araneta Center being declared a tourism district in Cubao by the Quezon City Government last January 2019, Piip also has a chance to contribute to the city’s tourism by granting Piipsters the chance to find the best promos and deals in the metro.

“As we continue our partnership, we want to highlight how closely both Piip and the Araneta Group are working together in safeguarding the continued growth of both our businesses through various engagements and initiatives in the coming months,” said Piip Mobile AG, Vice President for Strategic Business Development, Hildegarde Maea Atger. “We also want to communicate our gratitude to the Araneta Group for its trust in our brand and ingenuity that Piip is bringing to the Filipino market.”

Order Now at a Piip of a button

As it pushes to innovate its services, Piip levels up its instant messaging feature by introducing to the market its newest Order Now feature. This helps consumers to directly communicate their delivery orders to merchants and receive a direct response from a member of the merchant’s staff, as if they are speaking face-to-face. All they need to do is open their Piip Mobile app, tap on Order Now, select their restaurant of choice, and proceed with their transaction.

“The way food delivery is done here in the Philippines is through calls, websites, and mobile apps, but what they lack is the ability to communicate directly. While calls offer personal communication, it isn’t guaranteed that a consumer will be connected instantly. With Piip, we are changing the whole ordering and delivery dynamics and it’s all thanks to our Order Now feature. We offer a seamless way of ordering that is more convenient for both the consumer and the merchant, and with proper confirmation and documentation,” Atger explained.

The first Araneta Center merchant to be part of this Order Now feature is Pizza Hut and now Piipsters have an opportunity to order their favorite PAN Pizzas at a Piip of a button.

Continuing its growth in Metro Manila, Piip Mobile is expanding beyond the borders of Quezon City as it is now available in Makati, Bonifacio Global City, and Eastwood. Merchants, including local small to medium businesses from these new locations can now be seen in the Piip app which means Piipsters can enjoy more promos and deals.

“These new locations reveal that there is genuine interest in Piip from both merchants and consumers alike. As we move forward this 2019, we are working with different brands and other local SMEs to help make Piip’s service available in more key cities in Metro Manila,” shared Atger.

Team Orange 05 Jun 2020 0 comments Business
Japanese global apparel retailer, UNIQLO, is set to launch its E-commerce platform to the local market in the second half of 2020, to be available both in the UNIQLO website…