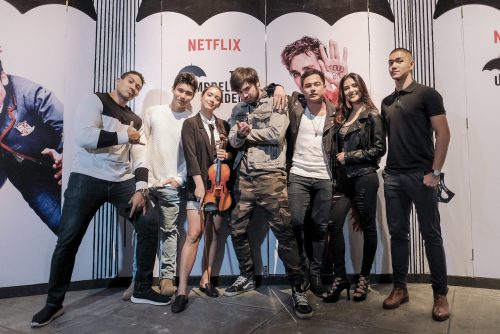 As a reward to these exhilarating challenges, they all unlocked the launch party at Shooting Gallery in Makati City, graced by subscribers, fans, and other celebrity guests including Erwan Heussaff, Richard Juan, Vince Velasco, Nicole Cordoves, Young JV, and Gino Quillamor. The whole event was streamed on Instagram Live via @pldthome @livesmart.

Catch the highlights of the epic Seven Super Rooms experience on this video:

Based on the comic book series created and written by Gerard Way, illustrated by Gabriel Bá, and published by Dark Horse Comics, the story of The Umbrella Academy starts in 1989, when 43 infants are inexplicably born to random, unconnected women who showed no signs of pregnancy the day before. Seven are adopted by a billionaire who creates The Umbrella Academy and prepares his “children” to save the world. Now, the six surviving members with conflicting personalities reunite upon the news of their father’s passing and must work together to solve a mystery surrounding his death, not to mention the imminent threat of a global apocalypse.

Stream “The Umbrella Academy” and all your favorite shows on Netflix conveniently with your PLDT Home Fibr account. Simply go to www.pldthome.com/Netflix and register using your myHomeID. Choose your preferred plan to start streaming. You can also enjoy Netflix and tons of entertainment with the TVolution Lite for only P99/ month.

For a convenient way of enjoying Netflix on your smartphone, you may now also charge your monthly subscription to your Smart Postpaid bill. To do this, simply go to www.smart.com.ph/pages/Netflix and create a new account; choose the Netflix subscription that suits you; and select SMART as a payment option. You shall then have to enter your Smart Postpaid Number and the one-time PIN sent to your number, and click “Continue” to start watching.