Louisiana’s world-famous Cajun flavors continue to make waves in the Metro as Popeyes launched its first restaurant in Pasay City. Foodies in the city can now feel the cool sea breeze and enjoy Popeyes’ delectable treats as America’s favorite fried chicken opens its newest restaurant at the National University Mall of Asia. 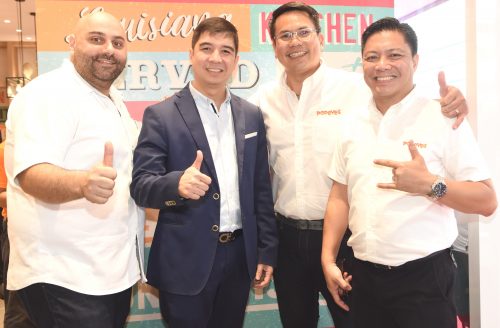 “This is our fifth store here in Metro Manila and the first in Pasay City. Now, students, employees, and shoppers don’t have to travel so far to enjoy our delicious offerings. I invite everyone to pop by and discover our unique menu items because they might just find their new favorites,” said Ton Gatmaitan, the marketing director of Kuya J Group, the parent company of Popeyes in the Philippines, during the launch.

A big crowd flocked to the vibrant new restaurant to feast on its signature juicy— but not greasy— Popeyes fried chicken that tastes like no other as it’s packed with distinct Cajun-inspired flavors from Louisiana, USA. To take it up a notch, diners can replace the usual gravy and instead pair their chicken with a dash of honey. The sweet and salty combination makes for a very delightful meal.
Now with five operating stores all over Metro Manila, more and more people can enjoy its must-try menu items such as the iconic honey biscuits, shrimp and fish burgers, and Cajun fries. Diners also got a taste of other treats like the hazelnut and white chocolate biscuits, as well as the Popeyes spaghetti, which is exclusive to Popeyes’ branches in the Philippines.

The launch featured a festive celebration with upbeat tunes from the marching band before the grand reveal of the hip and fun Popeyes restaurant. Similar to the other branches, Popeyes at NU MOA also has the brand’s new global restaurant image, which was first unveiled in ArcoVia City.