Power couple Emmet and Lucy famously clicked despite vastly different personalities and skill sets in 2014’s “The LEGO Movie.” What keeps them together is that amazing history and their real affection for each other.

But, what threatens to separate them now is Lucy’s concern that Emmet isn’t tough enough for this harsh new reality…and Emmet’s fear that he’s going to lose her if he doesn’t do something about it, in Warner Bros. Pictures’ highly awaited sequel, “The LEGO Movie 2” starring Chris Pratt (Emmet) and Elizabeth Banks (Lucy).

“Lucy pushes Emmet to be something that’s not natural to him,” notes Banks, returning as the resourceful warrior with the blue-and-fuchsia ‘do. “It’s not who he is and maybe it’s a mistake for her to expect that. I think that’s a life lesson everyone can relate to. You can’t change people. You just have to love them for who they are.”

“Lucy has always been battle-ready,” director Mike Mitchell explains. “As Bricksburg became a dystopian wasteland, she locked in. This is her world now, where she can kick butt and take names. She’s totally in her zone battling space aliens. Emmet on the other hand is still skipping through town like he doesn’t see how dangerous everything is, and that’s a problem for her. She tells him to grow up, toughen up, change with the times if he expects to survive.” 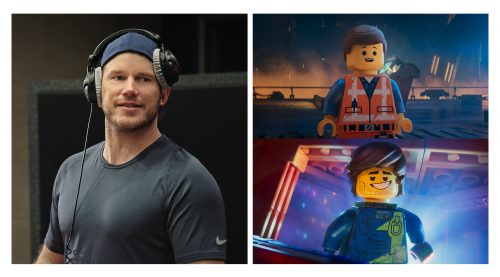 Naturally, she does it from love, and Emmet tries, poor guy. But brooding and looking grim just doesn’t work for him. Not when there are shooting stars to wish on, pink valentine hearts that declare “I love you” in tiny, sugary voices, and a cozy little dream home to build for their future, with a double-decker porch swing, trampolines, and a room just for eating waffles.

“The whole time he’s questioning himself, ‘Am I good enough, am I strong enough?,’” says Pratt, “and he learns through the course of this adventure many things about himself. I’m proud of what this story has to say in regard to this relationship, with all its doubts and expectations, and how all of that gets flipped on its head in such a funny and touching way.” 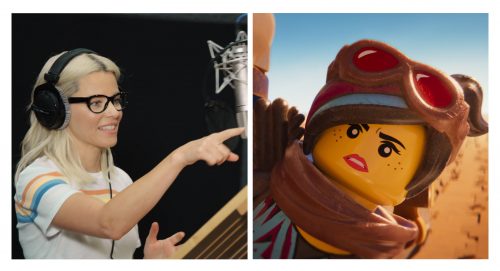 Another wild card in this deck is rock’n’roll Rex Dangervest, space pilot of the Rexcelsior and a self-described galaxy-defending archeologist, cowboy and raptor trainer who appears out of nowhere when Emmet needs a hand. The quintessential super-cool tough guy, complete with swagger and just the right amount of chin stubble, Rex is a Master Builder with some unexpected skills in his repertoire.

In striving for a vocal counterpoint between the two, Pratt says, “There were moments when I made Rex low and grumbly, but that was tricky because I didn’t want to step on Will Arnett’s Batman. It came down to a couple of things to reach for. Emmet is cheerful and optimistic, in a higher register. Rex is tougher, and more flip and indifferent, with a touch of John Wayne, and half the time he’s laughing because he doesn’t care what people think of him.”