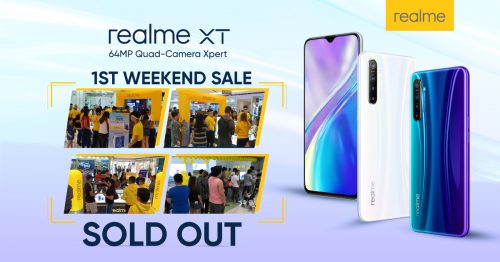 Realme Philippines marks yet again another sold-out feat with the first offline weekend sale and pre-order claiming for the 64MP quad-camera XPert, the realme XT. Claimants of pre-ordered units were seen lining up in several realme stores nationwide as early as 9AM to get their device and exclusive freebies.

The realme XT, which was launched last October 29 in the Philippines, brings flagship-class features in the midrange price segment – a clear reflection of the real value gene of the realme brand.

Highly praised for its impressive package, value price point and competitiveness, the realme XT receives a warm response from the local smartphone industry, including the tech media, gamers and mobile photographers, who all noted the smartphone’s extraordinary capabilities previously unseen in its price segment.

The new device for every creator

The realme community also welcomes new realme XT users, encouraging them to share their 64MP shots and get on the digital channels of realme Philippines.

Home Credit offers 0% interest installment for both six and nine months for the realme XT. Customers just need to present two valid IDs for the assessment, which can take as short as 1 minute.