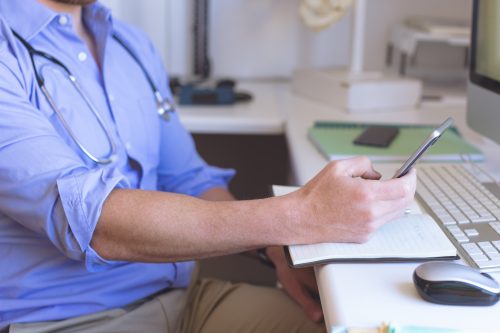 Dr. Joseph Adrian Buensalido is a busy man. He starts his day by making his rounds at a hospital, checking in on confined patients. Later, he’ll settle into his clinic, where he’ll receive outpatients in need of consultation. He’ll then drive to another hospital to monitor his wards before moving to two more others within the course of the day. As a doctor of internal medicine, he prescribes remedies for people with infectious diseases, overseeing several patients at a time. It’s a lot to handle, but one messaging app helps him see things through.

With its guaranteed privacy and ease of access, Viber allows Dr. Buensalido to manage his day with deft organization. On any given day, he’ll have as many as 20 threads for each of his patients. He’s not the only doctor to optimize the highly-secure messaging app for his practice, either—several of his colleagues use Viber to take some of the hassles out of their jobs.

Group chats to monitor patient progress. Dr. Buensalido calls his residents his alter egos. With such a packed daily schedule, they help monitor his patients when he isn’t around. On their Viber chat, they give constant updates on their wards, letting him track progress and monitor their recovery. “In the past, we just had to work with paper charts,” says Dr. Buensalido. “Now, having a chat lets us have digital documentation on our phones.”

Viber chats also allow him to get notice on patient test results. “Take a dengue patient for example. We’ll want to monitor their platelet count, because there’s a risk of bleeding,” he explains. “If the latest lab result comes out and it’s not urgent enough for any further action, the attending physician will just update us through Viber.”

Getting updates from nurses on desktop. Dr. Buensalido only uses Viber on his smartphone, but that doesn’t mean he’s limited to chatting with people on mobile, too. The chat app can be used on multiple platforms. The computers at the nurse stations in his hospitals, for instance, are equipped with Viber, allowing nurses to conveniently send messages to Dr. Buensalido round the clock.

Networking for patient’s convenience. Dr. Buensalido is also part of the Philippine General Hospital’s alumni association group chat. Many of these doctors have gone on to work in provinces. With this vast network, Dr. Buensalido can connect with doctors based outside Manila that he can refer to patients. “If I have a patient going home to Davao, I can shoot a text to the group and ask them if they know any internal medicine specialist there that can monitor him,” he says.

Viber, with its convenient features and built-in end-to-end encryption, lets doctors focus on saving lives by getting real-time updates about their patients in the most secure way possible.