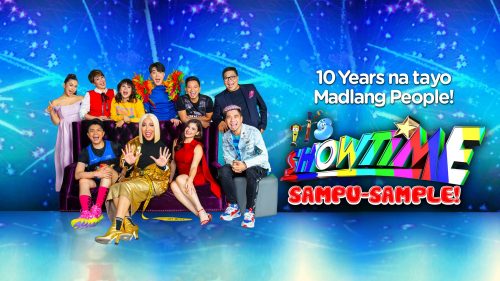 “It’s Showtime” brings its biggest anniversary celebration to date called “Sampu Sample,” a year-long festival of surprises that marks the program’s ten years of making Filipinos happy and invites all madlang people to not just have fun but also help in taking care of the environment and making a difference.

Each group’s Magpasikat performance is required to bring together ten dozen or 120 madlang people – ordinary Kapamilyas and not celebrities – and be given a chance to shine on national television.

The country’s number one noontime show also looks back on its ten years by relaunching its well-loved classic segments, including the dance competition that produced XB GenSan. “It’s Showtime” will also bring back other segments that kicked off the careers of world-class champions such as El Gamma Penumbra, Fourth Impact, Rachel Gabreza, and the TNT Boys and artists such as Onyok Pineda, Chunsa Jeung, Esang De Torres, GT, Hashtags, and the next Darna, Jane De Leon.

In the coming months, viewers and fans can also expect the program sharing more and more blessings, entertaining segments such as “Mr. Q & A” and “KapareWho” to churn out double the fun, the return of “Tawag ng Tanghalan,” and live shows with the hosts in in and out of the country.

For its tenth year, “It’s Showtime” is also pushing for environmental protection and conservation as it challenges the madlang people to support its advocacy project, whose details will be revealed soon.

Join the whole “It’s Showtime” family in celebrating its tenth anniversary beginning this October and watch it at noontime from Mondays to Saturdays on ABS-CBN on ABS-CBN HD (Sky Cable ch 167).