A place steeped in history is now your place to make your own history.

Perhaps, as a kid, you watched your first basketball game at the Big Dome with your dad. Now, you step onto the hard court as the college star player and your dad is your biggest fan! Your first championship—an experience you will never forget.

The place where you hung out as a kid has changed a lot, you muse as you look around before entering the spacious tower lobby on your first day of work. In your crisp, new business suit, you feel like you can conquer the world—and you will.

This is what the city can do. It can inspire great stories to tell your friends. The good ones help you create memories you later share; the best ones shape the person you become.

The City’s firsts
Far from being your grandparents’ or even your parents’ haunt, the Araneta City has undergone a major transformation in the past years. While commercial districts have risen all over Metro Manila, there remains a unique charm to Araneta City in the way that it embraces the past as it moves towards the future – one imagined way back when the foundations of the Araneta Coliseum were first laid down in the ‘50s.

Inspired by the Colosseum in Rome, the Araneta Coliseum—the biggest clear span dome in Asia when it was built—was meant to bring people together from everywhere and from all walks of life. The egalitarian vision for the Coliseum allows anyone to experience the same high of, say, a sports team’s rousing victory; or an international pop act’s first Philippine concert, regardless of social status.

The coliseum opened on March 16, 1960 with a boxing match between Gabriel “Flash” Elorde and Harold Gomes. However, it was the Muhammad Ali-Joe Frazier “Thrilla in Manila” fight that became its claim to greater fame in 1975. The first international artist to perform there was American singer Neil Sedaka on May 4, 1960; the first run of “Holiday on Ice” was in 1962; and the first Binibining Pilipinas pageant was held there in 1964, crowning its first Queen, Myrna Panlilio.

An entertainment and leisure destination, there were many reasons for people to come over. There was the Fiesta Carnival, then the largest indoor amusement park; Ali Mall, the blueprint for the modern mall that was fully air-conditioned and had an integrated parking facility connected on every floor; Skatetown, the indoor skating rink back when disco was cool; and even the Christmas Display on the facade of the Manila COD Department Store that attracted people from all over the metropolis.

Elsewhere within the property and much later on, other firsts emerged: the Araneta Bus Station, the first integrated bus terminal serving several bus companies, in 1993; Ticketnet, the first online ticketing system, in 1996; the first indoor, open-air, air-conditioned floating garden restaurant, the Oasis, in 2004; and the first Lazy-Boy movie theater, the Platinum Cinema, in Gateway Cineplex in 2005, among others.

Yet, the firsts don’t end there. Many individuals have experienced their own personal fists and milestones here, adding to the legacy of the City of Firsts. 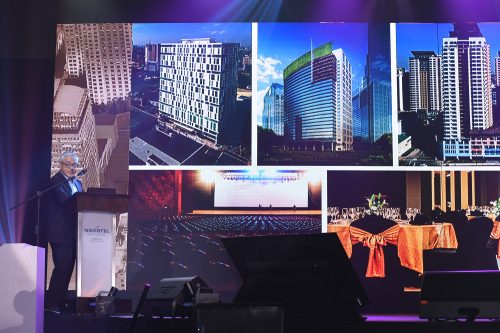 Mr Rowell Recinto, Chairman of the Management Committee, gives an overview of milestones and offers a peek into the ongoing and upcoming developments of the Araneta City during the brand launch on Sept 24, 2019

The Center is now a City
The Araneta City was introduced to the public via a milestone event for its many stakeholders, held at the Monet Ballroom of Novotel Manila-Araneta City on September 24, 2019.

Marked by performances including the trip-down-memory lane number from Addlib Dance Group, and a few songs by singer Kyla, the night was highlighted by a brand launch that included the reveal of a new logo, a new TVC, and the tagline: The City of Firsts. 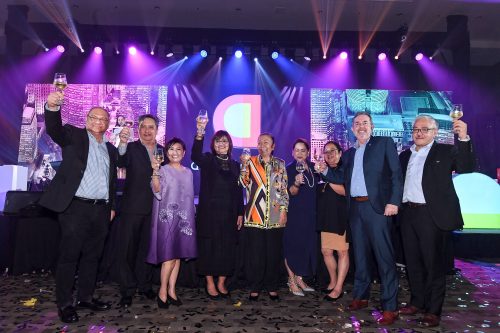 The launch was attended by the Araneta City management committee, lessees, office locators, brand alliance partners, agencies, representatives from various media outlets, and members of the Araneta family. The event became a touch point for guests to look back at Araneta City’s rich heritage of over 60 years of service to the public as it enters a new chapter in its storied history. 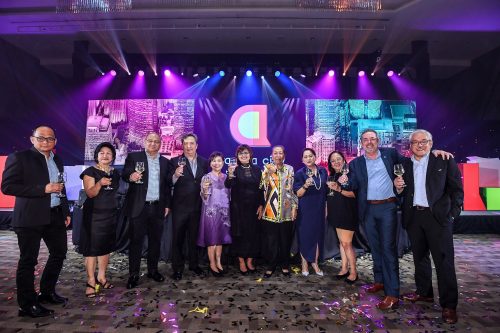 Honoring its pioneering heritage, the City is bustling with new developments and hints at more to come, as plotted in its masterplan. The renaissance that started with Gateway Mall, the Gateway Tower office building, and the first Novotel branded hotel has changed the Quezon City skyline. Add to that, the endless shopping and dining options in over 2,000 shops and restaurants; hundreds of shows a year at the Smart Araneta Coliseum and New Frontier Theater; the freshest produce in Farmers Market, and bargains in Farmers Plaza; and so much more.

The transformation continues with the ongoing developments in the eight-hectare PEZA-certified office hub Cyberpark (with two of five total towers completed and a third to start), the Manhattan Garden City (with 11 out of 18 residential towers already occupied), the expansion of Gateway Mall, and the first Ibis Styles Hotel in the country.

Just as new buildings and facilities rise with the historic and iconic Araneta Coliseum at the center of it all, the City has changed but its soul remains the same: It will always be a place that welcomes all; a fitting backdrop to the new milestones, endless possibilities, and first experiences many more will enjoy. #

Download the Araneta City app on iOS or Adroid as a digital companion to enjoy the City.
Visit the website for more information: www.aranetacity.com