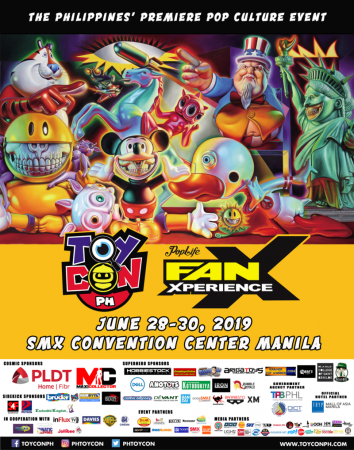 TOYCON is Asia’s biggest and longest running convention for collectibles, toys, anime, comics, cosplay, gaming and anything and everything related to hobbies and collections. It is now on its 18th year of thrilling fans and aficionados alike.

The TOYCON attained new heights last year as the first international multi-genre entertainment and hobbies convention based in the Philippines. This was done in partnership with Pop Life Entertainment, and the Salt Lake City Comic Con FanXperience, the third largest Comic Convention in the United States. Hence thd event was dubbed ToyCon Pop Life FanXperience, and it was the culmination of 15 years of fan entertainment in the Philippines.

Today, it is now regarded as one of the most anticipated and visited events in the country, with event-goers filling the venue to capacity with close to 40,000 people attending.

This year TOYCON is taking on a global stage with bigger attractions, more local and international guests, and the best Fan experience ever! With the biggest collections of comics, toys, designer toys and collectibles all under one roof. With more than 300 sellers and exhibitors in our retail floor.

The biggest names in art and toy design converge in this year’s TOYCON 2019, headlined by the godfather of street art and art toy legend, Ron English!

Also, be the first to see the biggest Batman statue in Asia, first unveiled at #TOYCON2019!

The giant 22-foot Imperial Palace Batman is a DC collaboration with Pop Life and China’s Imperial Palace Archives. This is truly going to be a staggering sight inside Hall 3 of the convention center and will be a fitting tribute to the Dark Knight’s 80th Anniversary. Don’t miss it!