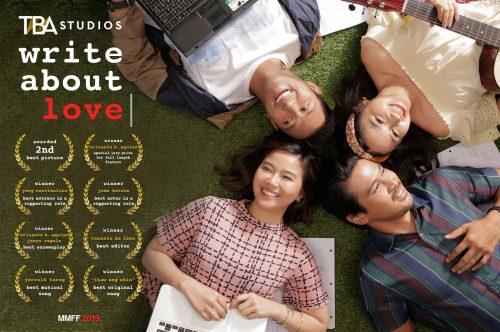 From the get-go, it would seem like TBA Studios’ Write About Love has everything going for it: a fresh take on the rom-com genre, a winning soundtrack and a multi-talented cast.

But despite some early favorable feedback from its premiere screening, the film struggled in the first few days of the 45th Metro Manila Film Festival as many moviegoers instead trooped to see the usual family comedies headlined by stars that have been dominating the annual Christmas season festival for years.

Write About Love, which opened on Christmas Day was even pulled out from cinemas where it did not perform as well as the expected top grossers.

These honors have validated what critics have been raving about the film all along.

On social media, there is a strong clamor for Write About Love to be screened in more theaters given its critical acclaim and recent slew of MMFF awards. Netizens feel that the film deserves to be seen by more people and that can only be possible if it is screened in more cinemas.

Write About Love has already resonated with audiences who have been tweeting some of its more memorable lines like “You’re my greatest love and also my greatest pain…but I will choose to forgive you every day,” “People who love are capable of hurting,” and “Walang love story na walang pain.”

Write About Love is TBA Studios’ official entry to the MMFF 2019. Directed by Crisanto B. Aquino and also starring Miles Ocampo and Rocco Nacino, the film received a G rating (suitable for all audiences) from the MTRCB and a B-Grading from the Cinema Evaluation Board.