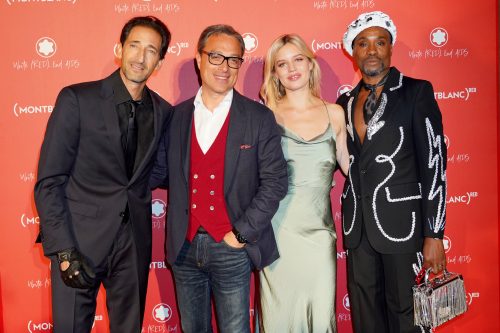 To mark the latest chapter in its partnership with (RED) and the collective fight to end HIV/AIDS, Montblanc gave guests and friends of the Maison a first look at the latest additions to its (MONTBLANC M)RED collection at a global launch event in Paris.

For the occasion, Montblanc converted the façade of its Champs-Elysées boutique in red and introduced an original art installation by Belgian artists Denis Meyers and Arnaud Kool, a fresh interpretation of the ‘the art of writing’ featuring powerful messages inspired by the (MONTBLANC)RED partnership. With the launch of the expanded (MONTBLANC M)RED Collection – a new Trolley and writing instrument collection – Montblanc reaffirmed its commitment to raising money and awareness for the fight to end HIV/AIDS.

PARIS, FRANCE – OCTOBER 08: Exterior of the boutique during the Montblanc: (Red)Launch event cocktail at the Boutique Champs-Elysees on October 08, 2019 in Paris, France. (Photo by Anthony Ghnassia/Getty Images For Montblanc)

Through its partnership with (RED) which launched in 2018 with (MONTBLANC M)RED line specially designed by Marc Newson, Montblanc gives customers an opportunity to make a tangible impact with every purchase of a (MONTBLANC M)RED product. For every (MONTBLANC M)RED writing instrument, luggage or accessory purchased, 5 Euros goes to the Global Fund to support HIV/AIDS programmes, which is enough to provide over 25 days of life-saving HIV medication. 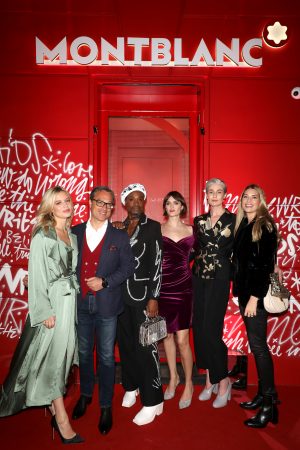 Following the boutique event, guests gathered for the second part of the celebrations at the iconic Monsieur Bleu which was renamed Monsieur (RED) in honour of the partnership. Just like the boutiques, it was turned red with specially designed (RED)-inspired artwork for one night only. Following dinner and cocktails, guests enjoyed a set by Martin2Smoove, one of the world’s most in-demand DJs.

The launch of the expanded (Montblanc)RED collection took place just one day before sixth Global Fund Replenishment conference in Lyon, France hosted by President Emmanuel Macron, bringing together governments, corporations, NGOs and private donors to pledge financial support for the fight to end AIDS, Tuberculosis and Malaria, with the goal of securing USD $14 billion in order to save 16 million lives over the coming three years.