Feel the thrill of young love on iWant as it finally streams the Thai romance-comedy “2gether The Series,” starring the blockbuster tandem of Bright Vachirawit and Win Metawin, starting this Sunday (June 28).

“2gether The Series” is the first Tagalized Thai series in the country and follows the unexpected romance between two popular college boys. Fans who have been following the series can expect new Tagalized episodes on the streaming service every day at 10:00 PM.

In “2gether,” ladies’ man but all-around nice guy Tine (Win) is plagued by the romantic gestures of a persistent gay admirer in his university named Green (Korawit Boonsri). 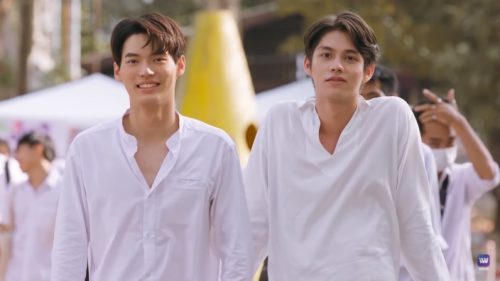 To get Green off his back, Tine’s friends devise a plan for him to seek the help of the popular yet mysterious guitarist Sarawat (Bright) to become his fake boyfriend. After refusing Tine’s first attempts to woo him, Sarawat eventually caves when Tine joins his music club.

In their deliberately public but pretend relationship, lines begin to blur as the two start to fall for each other for real.

Bright and Win’s tandem has gained a legion of passionate fans all over the world since the show debuted this year and became a consistent trending topic on social media platforms in the Philippines.

“2gether The Series” is the first Thai show that will be shown on iWant after ABS-CBN announced its partnership with leading Thai content company GMMTV.

Get your SarawaTine fix in “2gether The Series,” streaming on iWant for free starting this June 28 (Sunday).