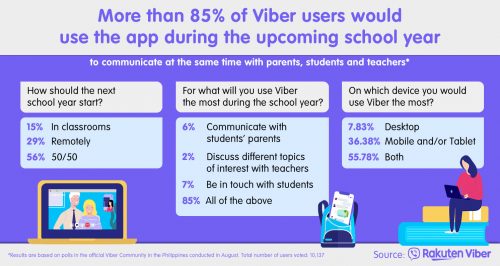 Viber, one of the world’s leading apps for free and easy communication, unveils in a recent survey that most of its Filipino users want schools to adapt a blended learning approach in the next school year, allowing students and educators to participate in either online or face-to-face classes as appropriate. The survey comes out in time for the Department of Education’s announcement of the opening of classes in public schools on October 5, and as a number of private schools have began to resume classes after months of lockdown due to COVID-19.

According to the survey done in the Philippines, which garnered a total of 10,137 responses, 56% of users said that classes should be done both in classrooms and online. The same poll also revealed that 85% of participants choose to use Viber to communicate with parents of students, discuss different topics with teachers, and keep in touch with students throughout the school year. 56% of respondents also shared that they will be using both Viber desktop and mobile/tablet for education-related activities.

The Philippine numbers are part of Viber’s global poll, which was conducted in 24 countries across APAC, Western and Eastern Europe (including the UK, France, and Germany), the Middle East, and North America, with approximately 185,00o respondents. Worldwide results showed an overwhelming preference for the platform to be used alongside major e-learning products to facilitate communication, with 70% of users saying they will use Viber during the coming school year to connect with all three groups: parents, teachers, and students. On average, 22% said they’d use both Viber on desktop and mobile/tablet for educational purposes.

Viber’s versatile nature has led it to be widely used for different educational purposes even prior to the pandemic. Now, the platform has become an invaluable tool in fostering education in a way that preserves normalcy as much as possible to ensure that children receive access to resources they need.

With kids now spending more time online than ever, Viber empowers them to communicate with their classmates, teachers, and loved ones without compromising their safety through its topnotch end-to-end encryption and additional security features.

“A year ago, the future of education becoming 100% remote seemed like a vision for the next 10 or even more years. Then the pandemic hit and it happened overnight. As a parent, I have always used Viber to communicate with my kids. Throughout the last few months, we have seen many parents, students, and teachers using Viber to communicate for educational purposes, whether online or physically,” says Djamel Agaoua, CEO of Rakuten Viber.

New features will also be released in the coming weeks, such as quiz mode for polls—which is already rolling out in some territories, reminders in My Notes, and Media Gallery enhancements to help students and educators with their learning activities. Keep Viber updated to get its latest version and experience its learner-friendly features in time for the new school year.