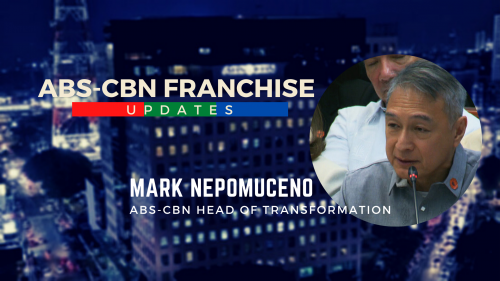 ABS-CBN is fully compliant with general labor standards, occupational health and safety standards, and security of tenure, according to the company’s head of transformation Mark Nepomuceno.

At the House panel hearing on Monday (June 29), Nepomuceno said ABS-CBN’s full compliance is the result of the company’s efforts to act in accordance with what it believes is right under the law.

In the same hearing, Labor Undersecretary Ana Dione said ABS-CBN was fully compliant with the directives of DOLE pertaining to labor and occupational health and safety standards after the agency conducted a routine inspection on the network’s premises in July to September 2018.

Dione explained that as a matter of procedure, there was a series of mandatory conferences conducted for the purpose of the parties showing proof of compliance or submitting employment records to disprove noted violations and findings during the inspection.

“ABS-CBN has fully complied with all the findings and violations that have been found out during the inspection,” she said.

Meanwhile, Nepomuceno said the ABS-CBN group has a total of 11,071 workers with 5,918 hired by ABS-CBN Corporation.

He added that based on BIR reports 1604CF and 1604E, the group had paid over 20,000 workers and suppliers in 2019, the estimated number of jobs it generates yearly.

He also explained that the ABS-CBN group is composed of 17 companies, including ABS-CBN Corporation which provides backing to its subsidiaries, and non-renewal of its broadcasting franchise will diminish its capacity to give support.

ABS-CBN president and CEO Carlo Katigbak echoed this and said, “the joint impact of COVID together with the cease-and-desist order is going to make it impossible for us to keep all our employees.”

“Sa panahon po ng pandemya, mahirap talagang makahanap ng panibagong trabaho. If you are retrenched and laid off, I think you will have to deal with the fear and uncertainty of not knowing how to provide for your family. Most of our employees are going through with this right now. I wish we could give them the assurance that everything will be ok, but that power rests in Congress,” he added.