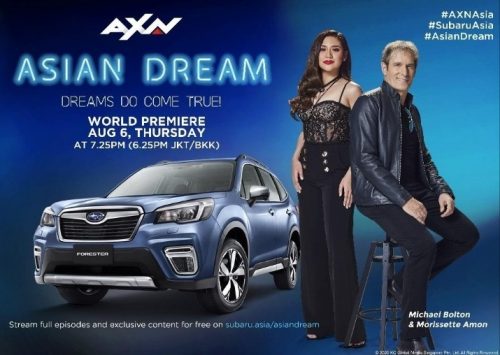 Subaru Asia has partnered with global music legend Michael Bolton to launch the first season of Asian Dream, a reality singing competition which spotlights six talented musicians from across Asia, who compete for a spot on Michael’s Asian Dream tour and as a Subaru Ambassador. Viewers that have been eagerly awaiting the show can watch it exclusively on AXN on 6 August, Thursday at 7.25pm.

Over the course of seven episodes, the contestants from Hong Kong, Malaysia, the Philippines, Singapore, Thailand and Vietnam are mentored, coached and pushed to the limits by Michael Bolton, and his co-host, singing sensation Morrisette Amon, along with celebrity guest experts. Across the progressive elimination format, the singers face a wide range of physical and mental challenges that will make or break them, until the final showdown. The winner will perform in the Asian Dream concert tour with Michael Bolton next year.

Motor Image – distributor of Subaru cars in the region and a wholly-owned subsidiary of Tan Chong International Limited – is committed to developing Asian talent who have passion, tenacity and drive. Motor Image previously sponsored programme favourite Asia’s Next Top Model and commissioned Bolt of Talent.

“We are proud to provide a unique platform and opportunity for aspiring singers to pursue their dreams. They are mentored individually by industry veterans, hone their skills through a series of challenges and improve their performance. Through this experience, as they grow as performers, I hope Asian Dream will serve as a launchpad for their future success,” said Mr. Glenn Tan, Deputy Chairman and Managing Director, Tan Chong International Limited. Mr Tan also appears on the show as a guest judge.

The show will premiere on AXN, a regional channel that redefines the entertainment experience for discerning audiences through world-class TV programmes. “As a platform that has been home to captivating reality competitions such as “The Amazing Race Asia” and “Asia’s Got Talent”, we are proud to partner with Subaru to launch this highly-anticipated show, and are always on the lookout to work with strategic partners and brands that reflect our values and vision of bringing quality content to viewers”, said Ms. Avani Bhanchawat, Vice President, Affiliate, Media & Sponsorship Sales, KC Global Media Asia, which owns AXN.

Multi-Grammy award winner Michael Bolton, who is one of the creators of the show, appears as a resident judge on Asian Dream. He has sold more than 65 million records worldwide, including nine #1 singles, ten Top Ten albums, and over two dozen songwriting awards. He became a viral internet sensation in the Saturday Night Live “Jack Sparrow” video, garnering over 200 million YouTube views. Speaking about his involvement in Asian Dream, Michael said, “I am thrilled to be partnering with Subaru Asia to find some of the best and brightest stars in the region, and helping them rise to their full potential. Although I was signed at the age of 16, it took me eighteen years to breakthrough, so I feel I can relate to these young artists’ aspirations. It takes more than just a great voice or an x-factor to make it in the music business; it also takes commitment and drive, values which we share with my friend and collaborator Glenn Tan.”

Alongside Michael Bolton, Asian Dream boasts a veritable line-up of established Asian entertainers. Filipina singer and actress Morissette Amon is the other resident judge of the show. Since joining the world of show business at the age of 14, she has gone on to win more than 30 awards, including Artist of the Year and Pop Song of the Year. Together with Michael Bolton, she guides the contestants as they rise to the challenge of becoming well-rounded, versatile and captivating performers.

The resident judges are joined by guest celebrities from across Asia, including:

The contestants are mentored by the guests in the show, to hone their skills as performers and thereafter compete head-to-head in a series of challenges. These give the contestants an opportunity to understand what is needed on the journey to become a professional singer.

Asian Dream is produced by Refinery Media in association with Passion Films and will premiere across Asia on Thursday 6 August at 7.25pm, exclusively on AXN. The episodes are also available online thereafter at www.subaru.asia/asiandream.