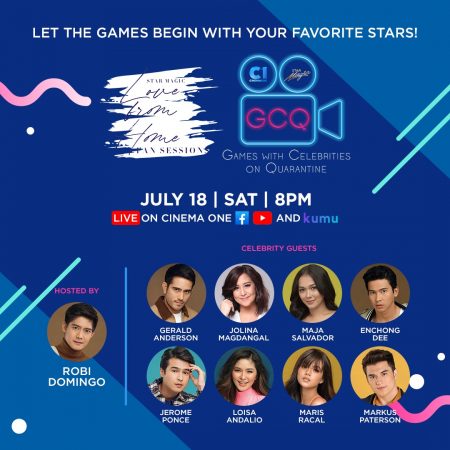 Cinema One and Star Magic team up to bring the fans closer to their favorite stars through the online event “Games with Celebrities on Quarantine (GCQ),” happening on July 18 (Saturday).

Three additional players from the celebrities’ fan clubs will be added to their corresponding teams to complete the five-man lineup of each group, which not only gives the solid supporters the chance to participate in a game night with their idols, but also hang out with them virtually.

Each team will compete to get the most number of correct answers in a game of charades, with the celebrities acting out the movie titles and the fans trying to guess the correct answer. They go head to head until one team is declared the overall winner.

Hosted by Robi Domingo, the event is part of Star Magic’s “Love From Home: A Quarantine Special” campaign. Its highlights will be aired on “Cinemanews: At Home Edition.” It is also for the benefit of ABS-CBN Foundation Inc.’s “Pantawid ng Pag-Ibig: Isang Daan. Isang Pamilya.” campaign, in which a donation of P100 can help feed one family.

Don’t miss the chance to see your beloved Star Magic artists enjoy a virtual game night with their fans in “Games with Celebrities on Quarantine (GCQ)” this July 18 (Saturday)! 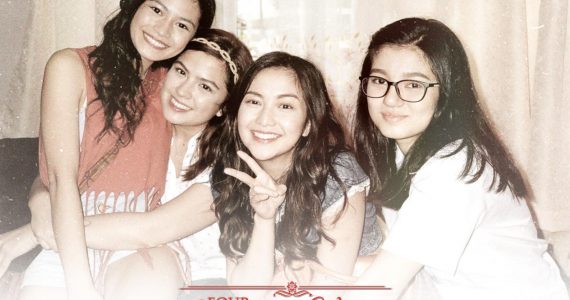 Team Orange 29 Nov 2020 0 comments
Star Cinema takes us back to the time when iconic siblings Teddie, Bobbie, Alex and Gabbie Salazar deal with challenges and heartaches in ‘Four Sisters Before The Wedding.’ Topbilled by…

Team Orange 29 Nov 2020 0 comments Food & Beverage
To celebrate the holidays, Jim Beam has introduced a special ‘tin pack’ available at S&R for P1,438.00. Included are a limited-edition tin as well as two 1-liter bottles of Jim…

Above and Beyond: ING-FINEX CFO of the Year Mylene Kasiban

Team Orange 29 Nov 2020 0 comments Banking & Finance
Anyone who has ever worked in a company with a Chief Financial Officer (CFO) might have the perception that the CFO is cold, distant, and kalaban ng lahat (everyone’s enemy).…