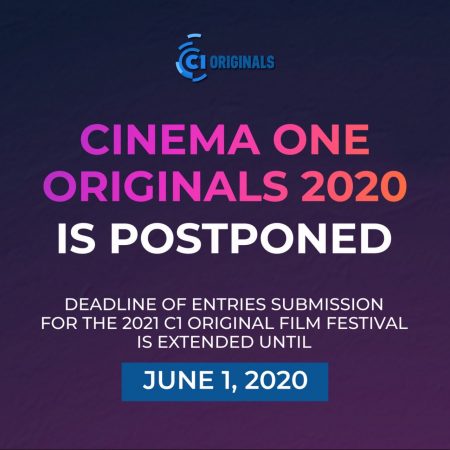 Cinema One Originals puts off the film festival slated this year and extends deadline for the submission of script entries for its 16th run until June 1 (Monday), allowing more time for debuting filmmakers to craft fresh and fascinating narratives intended for the big screen.

“After careful deliberation, we have decided to postpone this year’s C1 Originals given the detrimental COVID-19 pandemic we are facing,” said festival director Ronald Arguelles. “The health and safety of our filmmakers, artists and production teams is our priority.”

The C1 Originals, which usually runs in selected theaters during the last quarter of every year, will be held next in 2021.

Meanwhile, entries for this—complete scripts with sequence treatment—may be original or adapted and must be a directorial debut or a filmmaker’s second produced full-length feature film. Carefully selected finalists will then be granted with a P3 million production budget each.

One of the divisions of ABS-CBN Films, C1 Originals has been producing breakthrough movies with thought-provoking stories for the Filipino audience since 2005. Throughout these years, the independent film festival has provided dauntless filmmakers a platform to produce their masterpieces and fulfill their visions.

Last year, the LGBT drama feature film “Sila-Sila” directed by Giancarlo Abrahan emerged as Best Picture from over 130 entries submitted to the festival.

Visit cablechannels.abs-cbn.com to see the full mechanics and submit entries.