Three poachers who shot and butchered a critically-endangered tamaraw (Bubalus mindorensis) escaped apprehending authorities the other day. Alert rangers spotted the poachers drying meat near the base of Mt. McGowen inside the Mounts Iglit-Baco Natural Park before lunch on 28 August. 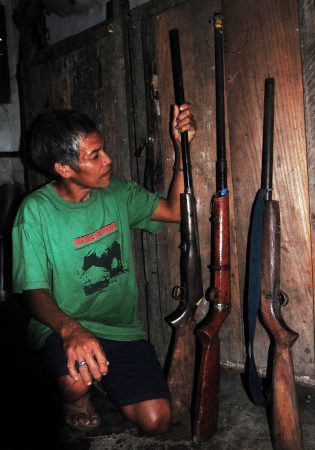 TCP ranger shows off captured pugakang or homemade shotguns. The crude contraptions are used for hunting game and fire 12-gauge or 20-gauge shells at an effective range of 50 feet. The COVID-19 pandemic has left few rangers and wardens to patrol the Mounts Iglit-Baco Natural Park, the last stronghold of the critically-endangered tamaraw. (Gregg Yan)

Two poachers were quickly surrounded and caught by park rangers and wardens while a third escaped. Two pugakang or homemade shotguns were confiscated, as well as a sack of tamaraw meat, to be dried and illegally sold as tapa or buffalo bush jerky. “Pang kain lang po ito, tapos yung iba pang benta (We’ll eat some of the meat and sell the rest on the market),” remarked one of the poachers.

After three hours in custody, the two apprehended poachers ran off and escaped into the jungle. 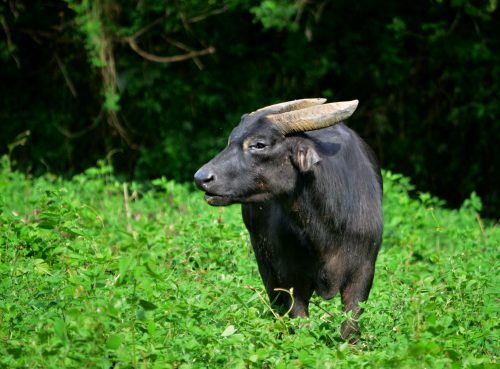 Tamaraw (Bubalus mindorensis) are endemic forest buffalo found only on the island of Mindoro in the Philippines. Numbering only about 600, they are considered critically-endangered by the IUCN, the highest rating for any species. At least 480 live inside the forests and grasslands of the Mounts Iglit-Baco Natural Park, with an additional 100 or so holding out in scattered pockets around Mindoro. (Gregg Yan)

Tamaraw are the world’s most endangered buffalo species and are considered by the International Union for the Conservation of Nature (IUCN) as critically-endangered, the highest risk-rating for any species. Only around 600 are left worldwide, most found in four isolated areas in Mindoro. They are legally protected under the Wildlife Act or RA-9147. Killing endangered wildlife entails up to 12 years of jail time plus a fine of up to PHP1 million.

“Poachers might be using the COVID-19 lockdown as an opportunity to illegally enter our country’s protected areas and hunt animals. Rest assured that our rangers won’t stand for this. We’ll see to it that these poachers are prosecuted to the full extent of the law,” vows TCP head Neil Anthony del Mundo.

Dedicated rangers and wardens of the Mounts Iglit-Baco Natural Park (MIBNP) and Tamaraw Conservation Programme (TCP) have been conserving the tamaraw for decades. From less than 100 animals in 1969, numbers have recovered to about 600.

Just one of TCP’s 24 rangers is a regular employee with benefits. One ranger plus 32 of the 35 park wardens recently lost their jobs when the park closed due to the pandemic. 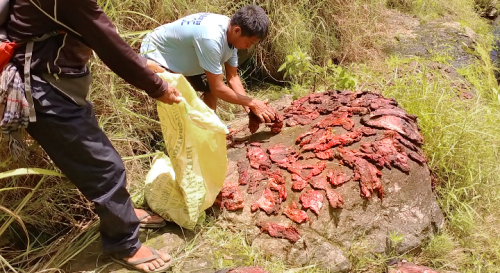 “DENR strongly condemns this act of slaughtering endangered wildlife,” says DENR Asec. Ricardo Calderon. “Nothing, not even the pandemic, is an excuse to kill legally-protected wildlife, for no one is above the law. We will work with both DENR MIMAROPA and the TCP to ensure that poachers get the punishment they deserve. Let this serve as a lesson for would-be poachers.”

The United Nations Development Program’s Biodiversity Finance Initiative (UNDP-BIOFIN) and the Department of Environment and Natural Resources (DENR), plus allies like PH Parks & Biodiversity have launched #TogetherforTamaraws and the Tamaraw Society to raise cash gifts for the rangers, particularly those most affected by the pandemic.

“Our tamaraw frontliners who in spite of losing incomes due to the pandemic, continue their daily patrols without expectation of compensation just to ensure the safety of our tamaraw. It is high time and urgent that budgetary resources for environmental protection and enforcement be given utmost priority for protected areas, which are home to critically-endangered and threatened species like the tamaraw,” says BIOFIN Philippines project manager Anabelle Plantilla.

“UNDP Philippines continues to support the rangers and wardens through the #TogetherforTamaraws campaign. Now more than ever, we need to join efforts to protect the tamaraw – a species in danger of extinction. We must protect what is left of our collective respect for life on Earth,” concludes UNDP Philippines resident representative Enrico Gaveglia.