The COVID-19 pandemic has underlined the crucial need for connectivity like never before. For underprivileged communities, access to internet connectivity — or the lack thereof — determines whether demands of the new environment, such as distance learning and remote working, will be met by families belonging to these communities.

In line with its continuous efforts to make internet accessible to Filipinos especially during this time, Globe Telecom officially launched the School Bus WiFi program in Manila City today. The kick-off also marks a new, bigger vision of Globe and KonekTayo WiFi to provide fast, reliable and low-cost home internet connectivity in underserved markets in the locality.

The use of KonekTayo WiFi service will be free for the first hour for public school students and teachers in Manila who were provided 289,000 Globe SIM cards.

Through the School Bus WiFi campaign, Globe also extends support to school bus operators whose main source of livelihood was put at stake by the pandemic.

Jaime Augusto Zobel de Ayala, Ayala Corporation Chairman and CEO and Globe Telecom Chairman said, “Against the backdrop of COVID-19, internet access has become a lifeline more than a luxury. Internet access is needed by students to pursue online education, by workers to continue earning a living while working from home, by families to stay connected with each other. With Globe’s School Bus WiFi in the City of Manila, we are able to help in ensuring that residents have access to affordable WiFi connectivity. We look to partner with other local governments to expand this initiative.”

Ernest Cu, Globe President and CEO said, “We recognize the difficulties faced by the private school transport industry, especially now that classes have started. We sought to develop an innovation that will not only provide this industry with a new opportunity, but will also bring connectivity to students and communities in areas that need it most.” 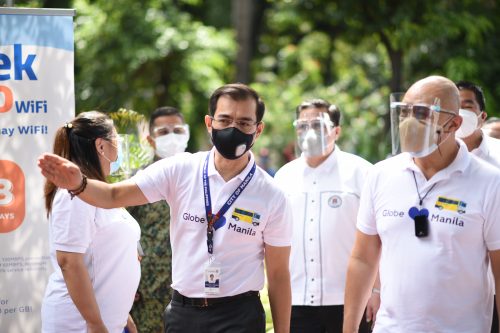 Globe’s KonekTayo School Bus WiFi, a fast and secure community WiFi service that aims to provide households with affordable internet of as low as P15 a day, was launched in Manila today. Photo shows Manila Mayor Isko Moreno with Globe President and CEO Ernest Cu at the kickoff. KonekTayo WiFi service provides internet for as low as P15 a day to communities which need it most.

Formerly known as KapitWiFi, KonekTayo WiFi is a fast and secure community WiFi service that aims to provide households with affordable internet. The School Bus WiFi campaign is part of KonekTayo WiFi’s bigger purpose of making internet connectivity more accessible for underserved families and communities across the country. With KonekTayo WiFi, customers simply need to connect to a KonekTayoWiFi hotspot, purchase a promo and surf all day.

With the School Bus WiFi Project, students or people who work from home can avail of the KonekTayo WiFi service for as low as P15 a day.