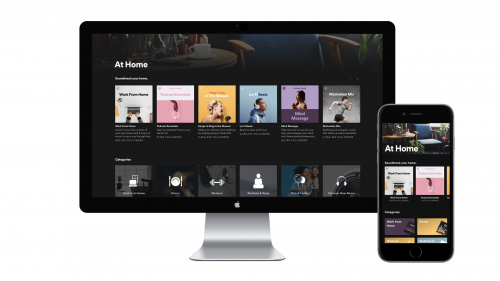 As people around the world have increasingly moved inside over the past couple of weeks, we’ve seen music and podcast listening change in a variety of ways.

For example, with fewer people streaming from their cars during their daily commutes and an increase in working from home, more people are streaming across devices like computer desktops, TVs, smart speakers, and gaming consoles. There’s also been an increase in cooking- and housework-themed playlists, showing that people are primarily focusing on family and domestic tasks instead of music intended for get-togethers. Self-improvement podcasts (think wellness, meditation) are seeing an uptick as well.

Hungry for more? Read on for some additional streaming trends that we’re seeing on Spotify based on listening from March 19 to 25, when much of the world had committed to staying home. (Before you ask, yes, streaming of The Police’s “Don’t Stand So Close to Me” saw more than a 135% spike in streams in recent weeks — an important reminder to keep 6 feet [2 meters] of distance from anyone outside your household.)

Knowledge is power—and Spotify listeners are certainly staying in the know. We’ve seen increased interest in news podcasts such as Coronavirus: Fact vs. Fiction (CNN), Coronavirus Global Update (BBC), and Don’t Touch Your Face (Foreign Policy). Gimlet’s show Science Vs also has a few recent episodes on the COVID-19 outbreak.

Parents are playing music and podcasts for their children.

Right now, parents are facing a new challenge: keeping their kids safe and entertained — and maybe even helping them learn something — while they try and get their own work done. Due to this, we’ve seen an increase in the streaming of Kids & Family content, particularly music to help kids sleep. In fact, both children’s music and classical have seen boosts over the past week.

Check out some of the top playlists and podcasts parents are streaming for kids.

Listeners are in a more “chill” music mood.

During this time we’ve also noticed that the songs Spotify listeners are adding to their playlists are more “chill”—meaning they’re more acoustic, less danceable, and have lower energy than songs previously added. Plus, the music tends to be more instrumental, featuring instruments rather than vocals. Looking for your own calm inspiration? Check out the many playlists on our Chill shelf.

Playlist collaboration and social sharing is bringing people together.

Specify have seen an increase in collaborative playlists during this time frame, allowing people to connect over shared music and have virtual jam sessions together. (And if you didn’t know, here’s a video tutorial for creating collaborative playlists of your own so you can get started). Plus, Spotify users are sharing more content on their social networks than usual, so they can let their friends and followers know what they’re up to from afar. Learn how to share your song of the moment to Snapchat or Instagram.

Artists who livestream concerts are seeing a spike in listening.

Now that live tours are postponed, many artists are staging virtual concerts online. Afterward, listeners are heading to Spotify to stream the artists—giving them a similar bump to the one artists typically see after live concerts. James Blake, Indigo Girls, Ben Gibbard, Chloe x Halle, Code Orange, and Jewel are just a few of the many artists to see spikes in streaming so far.

Podcasts and playlists are helping people keep fit and healthy.

Listeners have been taking time for themselves and making their health and wellness a top priority. More people have been listening to podcasts in the Health & Fitness and Lifestyle & Health categories in the past week, with users also streaming more podcasts with the words “cooking” or “recipes” in the title or description. When it comes to playlists, users are creating and following more workout playlists than they were a month ago, and streams of running, yoga, nature sounds, and meditation playlists are up.

In Italy and Spain, residents have taken to singing songs together from apartment balconies and windows, especially in honor of health care providers and first responders. Two of the songs sung in Italy have soared: streams of “Abbracciame” increased by 820% on March 13, and streams of “Azzurro” soared more than 715% on March 14. In Spain, streams of the ’80s track “Resistiré”(I Will Resist) by Duo Dinamico leapt by more than 435% starting March 15, after videos of the event started circulating on social media