It’s LOL time with “The Mall, The Merrier” on WeTV and iflix! 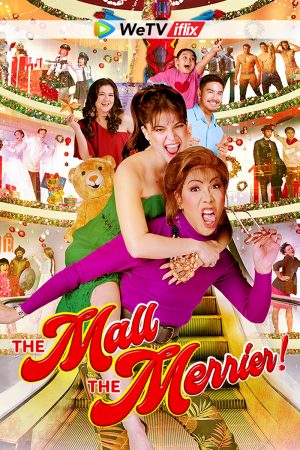 After a stressful day at work, nothing can cure the blues more than a good laugh. And the best way to do that is with a crazy funny movie! The Vice Ganda–Anne Curtis starrer The Mall, The Merrier delivers all the right punchlines with a hefty dose of good ol’ Pinoy humor. And you can stream it now on WeTV VIP and iflix VIP.

Directed by Barry Gonzalez, based on a screenplay by Daisy Cayanan, the film follows the story of siblings Moira/Moises Molina (Vice Ganda) and Morissette “Setset” Molina (Anne Curtis) who get caught up in a bitter feud when they become the heirs of the family property, Tamol Mall. Turning up the ante is the arrival of Aunt Moody (Dimples Romana) who is set to stake her claim as well. Things start to get shady at the mall when mysterious events start to happen and the mannequins and toys come alive after dark. What ensues is a riotous comedy that will leave you ROTFL.

The movie marks the first time the Anne Curtis and Vice Ganda are co-starring in a film together, apart from being co-hosts on a popular noontime show. Rounding out the cast are Tony Labrusca, Elisse Joson, Jameson Blake, and Ruffa Gutierrez.

The Mall, The Merrier emerged as one of the big hits out of the Metro Manila Film Festival last year; the film earned over PhP746 million pesos in the box office. It is a co-production between Star Cinema and Viva Films. All the mall scenes were shot in the iconic Harrison Plaza before it closed at the end of 2019.

The Mall, The Merrier is the perfect comedic foil for your weekend, or on any stressful day! Why not check out the trailer of the film, or better yet, start streaming it now on WeTV VIP or iflix VIP.

iflix is Asia’s leading streaming platform featuring the best in local, regional, and international content, which can be seen in Indonesia, Malaysia, Thailand and the Philippines. WeTV is home to Asian Premium content featuring the best shows from China and the rest of Asia. You can download both the iflix and WeTV app on the App Store and on Google Play. Content featured may not be available in all WeTV and iflix regional territories.