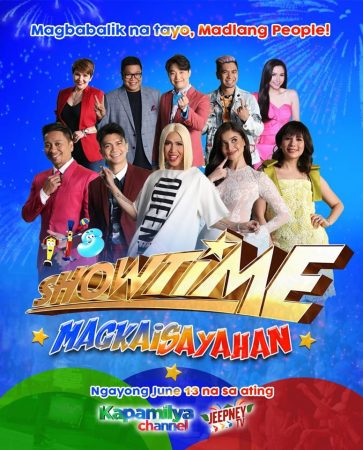 “It’s Showtime” is making a big comeback to give Filipinos good vibes and relief and help them recover from the impact of the pandemic through livelihood opportunities as it returns to TV on Kapamilya Channel and Jeepney TV starting this Saturday (June 13).

The highly anticipated segments include “Super Fiestars,” which will rally the superstars of different local barangays to showcase their talents, provide entertainment to viewers, and contribute to their community’s recovery efforts.

Filipinos will also be given a chance to apply for a job live on the show via “1Ted: Now Hiring,” where two ‘applicandidates’ will go face-to-face each day for a job opportunity. After three rounds, the employer decides which one of them is the winner and will go home with the cash prize.

In the game segment called “Pamilyanaryo,” the show will pay tribute and offer rewards to families nominated by different barangays to have done great contributions to the community. In each episode, two members per family will join the live show, and one family gets to move on to the jackpot round with a chance to win P1 million.

The vocal showdowns at noontime will also resume in “Tawag ng Tanghalan: Tapatan ng Barangay.” In this new edition, two amateur singers representing two barangays will battle it out in two rounds to become the daily champion and compete in the weekly finals.

With the return of “It’s Showtime’s” live shows, the show has issued internal guidelines to protect the health and safety of its artists, crew, staff, and studio contestants at all points in show’s production.

“It’s Showtime” will air at noon from Mondays to Fridays on Jeepney TV and Kapamilya Channel (SKYcable channel 8 on SD and channel 167 on HD, Cablelink channel 8, G Sat channel 2, and most cable operators under the Philippine Cable and Telecommunications Association (PCTA) nationwide. Check mysky.com.ph and contact cable operators to know the channel assignments in other areas in the country.

While Kapamilya Channel will initially be seen by cable and satellite TV viewers only, ABS-CBN will find more ways to reach more Filipinos and bring news, public service, and entertainment to every Kapamilya around the world.

Welcome “It’s Showtime” back on TV by watching it on Jeepney TV and Kapamilya Channel on SKY, Cablelink, G Sat, and most cable operators under PCTA nationwide. Livestreaming of the Kapamilya Channel and on-demand viewing of its programs are available on the iWant app and on iwant.ph.