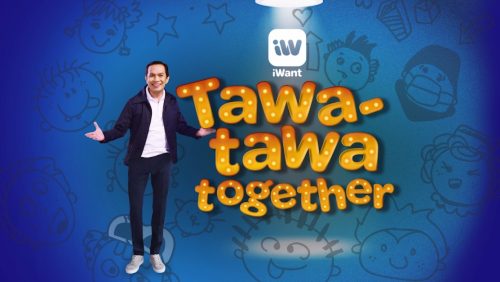 Stay home, combat the blues, and share a laugh with loved ones this quarantine season by watching iWant’s new comedy show “Tawa Tawa Together” led by comedian Alex Calleja, which is streaming for free.

Shot via Zoom, the gag show brings together comedians such as Alex Gonzaga, Pokwang, Melai Cantiveros, Jason Gainza, Donna Cariaga, James Cariaga, TJ Valderama, the cast of “Goin Bulilit,” Vandolph Quizon, and Herbert Baustista to give a hilarious and relatable spin on situations many families find themselves in while staying at home.

In the pilot episode, “Home Sweetie Home” star Nonong Ballinan samples the hilarities of video chatting with someone’s crush and avoiding people who borrow money. Host Alex Calleja also shares his ludicrous experiences with being at home too long with his antsy wife.

Crazy Duo’s Gedent and Diego play a wacky, translated interpretation of the “It’s Showtime” theme song all the way from Cebu, while YouTuber musician Rex Ricamara offers a spoof song about the dangers of going outside and the craziness of staying indoors.

The gang then modernizes “May Pulis Sa Ilalim Ng Tulay” and wittingly turns it into “May Tanod Sa Gilid ng Kanto” to sing about a series of laughable yet realistic anecdotes.

Get your serotonin fix with Alex Calleja and his guests in “Tawa Tawa Together” on the iWant app (iOs and Android) or iwant.ph.